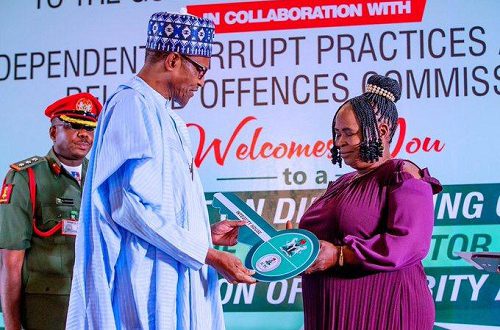 PRESIDENT Muhammad Buhari today honoured Mrs. Josephine Ugwu who has shown valour, relisience anda high moral compass in the discharge of her duties as she was given a brand new apartment in Lagos for her act of honesty and integrity.

Mrs. Ugwu was honoured at the two-day national summit on Diminishing Corruption in the Public Sector organized by the Office of the Secretary to Government of the Federation (OSGF) in collaboration with the Independent Corrupt Practices and other Related Offenses Commission (ICPC).

Also the Independent Corrupt Practices and Other Related Offences Commission (ICPC) recognized the FAAN staff for her honesty and integrity in the discharge of her duties.

You will recall that in a celebrated case in the year 2015, Mrs. Ugwu while carrying out her duties as a cleaner at the Murtala Muhammed Airport, Lagos saw the sum of $12,200,000 in a toilet and submitted it to security officials. The money was subsequently returned to the owner. She has also refunded other sums lost by several other passengers at different times.

With a salary of just N7,800 a month in Lagos, she challenged our collective integrity of the nation as on three separate accounts she found and returned humongous sums of monies earning her a reputation as a person of great integrity.

Mrs. Ugwu was subsequently given automatic employment in the Commercial Department of FAAN in recognition of her honesty and exemplary conducts.

The event climaxed with a hand shake to Mrs. Ugwu from the President of the Federal Republic of Nigeria, President Muhammadu Buhari. She was also given a brand new apartment in Lagos for her act of honesty and integrity.

Nigerianflightdeck is an online news and magazine platform reporting business stories with a bias for aviation and travel. It is borne out of the intention to inform, educate as well as alter perceptions with balanced reportage.
Previous NAHCO generates N7.38 billion revenues in Quarter 3, shows 30% PAT increase
Next Nakumbuka Day set to hold in Ghana, November 26