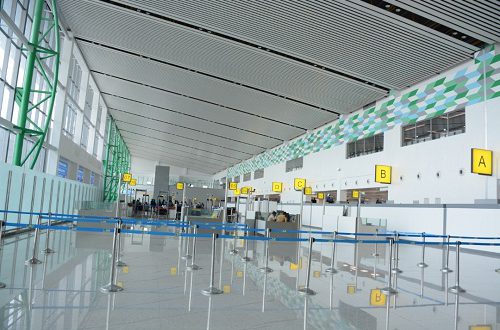 MANAGING director of Federal Airports Authority of Nigeria (FAAN), Captain Rabiu Hamisu Yadudu has reemphasized that safety is what provides confidence for people to use aviation services stressing that without safety at almost 100% there will be no confidence and thus no aviation.

The FAAN boss made this known against the backdrop of the upcoming safety week scheduled to kick off 28th September, 2021 with theme: “Training, the key to resuming activities” stating that there are  various activities earmarked to showcase the importance of safety

Yadudu who spoke on the silent but salient role of safety explained to reporters that  safety cuts across all facets of aviation business from airlines to airport companies, fuelers, ground handlers, flight dispatchers, pilots and the entire eco-system in the aviation community.

“Safety is very silent, there are things that you see physically that will draw attention but safety is something you will not know is missing till things happen.

“Aviation is a very delicate business, if there is no safety, nobody will fly. Safety means delivery almost 100% all the time because at 90% no one will fly. If you know 90% you’d be going home and 10% you wouldn’t, no one will fly. So it has to approach 100% because without safety, no confidence and without confidence no flying.

“There must be confidence that aviation can take you from home to your business that gives you the confidence to fly. That confidence allows all of us to be here as aviators from airlines to airports companies to fuellers and ground handlers, everybody. It is everybody’s responsibility  especially the media,” he said.

Also speaking on safety, General Manager, Safety, FAAN, Nath McAbraham-Inajoh, IAP highlight the format the week would go and the innovations introduced to spread the word about safety stressing that stakeholder collaboration is key to this year’s celebration.

Mr. Inajoh said,” The new thing we’re going to be bringing in is the fact that, for the first time, safety week will hold simultaneously across the country. Before now, individual airports chose when to observe it. But on the recommendation Airports Council International (ACI), it suggested that the week should hold in September, across Africa. So FAAN has keyed into that but we’re allowed to the week in September. So we’ve chosen the last week in September. So when you take off at any airport in the country during the week’s observance you’ll see some safety activities taking place.”

He went on, “I’ll like to emphasize stakeholders’ collaboration. So in all the airports, we will hold stakeholders’ meetings with our neighbours in each of the airports. We will engage them. We will highlight issues such as airport encroachment, incursion and some environmental activities that attract wildlife. For instance, agriculture, waste disposal which could attract birds around the airport would be discussed with our neighbours, Inajoh said.

“You hear what the MD just said, people jump the fence to access the airport and still have audacity to challenge FAAN security. These elements and similar others we would like to meet. We want them to understand that FAAN IS their friend. We want them to know that as the airport grows, aviation grows, and we can employ their youth and some FAAN businesses could even spillover to their communities. So,  stakeholders engagement is fundamental to us during the safety week.”

Nigerianflightdeck is an online news and magazine platform reporting business stories with a bias for aviation and travel. It is borne out of the intention to inform, educate as well as alter perceptions with balanced reportage.
Previous REDTV premiers Assistant Madams Season 2, unveils new cast at launch in Lagos
Next Transport specialist lists problems, some solutions to airline mortality in Nigeria