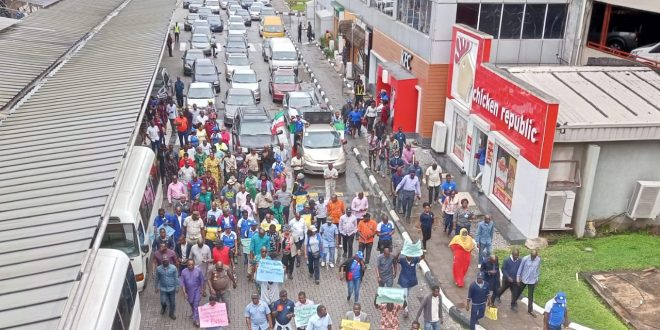 UNIONS North, South, East and West of Nigeria made good their threat as they embarked on a peaceful protest over alleged inclusions into the Civil Aviation Bill that will affect their activities as unionists

NigerianFLIGHTDECK’s checks had however reported that the controversial clause that led to their action was already part of the Act, 16 years ago. READ MORE: Planned protest: Civil Aviation Act 2006 contains clauses unions upbeat about- Checks

The clauses they claimed added includes, “1(1) All services which facilitate and maintain the smooth, orderly and safe take off, flight and landing of aircraft, embarkation and disembarkation and evacuation of passengers and cargo respectively in all aerodromes in Nigeria are hereby designated as essential services pursuant to the provisions of Section 11(1) of the Constitution of the Federal Republic of Nigeria, 1999 (as altered).

“(2) The Minister may by regulations prohibit all or such class or classes of workers, officers and other employees or persons whether corporate or natural, engaged in the provision of services specified in subsection (1) of this section from taking part in a strike or other industrial action.

” 2(1) The provisions of the Trade Disputes (essential Services) Act, Cap. T9, Laws of the Federation of Nigeria, 2004 shall apply to service in the Agency, facilities managed by the Agency and in the implementation of this Bill. (2) There shall be no strikes, lock-outs, pickets, blockades, service disruptions, etc of any kind within all facilities managed by the Agency and where any labour dispute arises, such dispute shall be resolved by the Agency. READ MORE: Unions to protest ‘smuggled’ repressive clauses into Aviation Acts to proscribe unionism

However, the said clauses were cited in section 67 (1) and (2) on page 40 of the Civil Aviation (Repeal and Re-enactment) Act 2006 but failed to dissuade already made up minds from their intended action.

In Kano, it was learnt that activities were halted from around 7am- 11am but it was unsure whether it was due to the unions’ call to arm or if it was as a result of the imbroglio between FAAN’s Airport Manager and Air Traffic Controllers(ATC) who had equally decided to embark on shutting the airspace for their reasons.

In Nigeria College of Aviation Technology ( NCAT) protesters held up placards and demanded that rights to association be adhered to.

Meanwhile, there was heavy traffic movement this morning at the local wing of the Lagos airports as aviation embarked on a peaceful protest over some clauses in the aviation bill passed by the National Assembly.

The unions officials and their members matched around the domestic terminals chanting solidarity songs and carried placards that read:

Gates and Offices of FAAN, NAMA and the NCAA were locked as all members of the three unions, NUATE, ATSSSAN, ANAP and NAAPE joined in the protest.

The unions say, the clause as contained in the bill says, they cannot embark on strike, the minister of aviation will henceforth directs the affairs of the unions and it classify them as essential personnel which is in variance with the ILO Convention.

They insisted that if no action is taken to expunge the clause after 14 days, aviation workers will embark on a full blown strike.

The unions also kicked over provisions in the bill, which gives the Minister of Aviation overriding powers to direct affairs on issues affecting trade unions in the industry, which they have described as usurpation of the duties of the Ministry of Labour.

He said withdrawal of services by personnel that threatens lives could be described as essential , for which the transport sector does not qualify.

According to him, only air traffic control services qualify as essential: because their advisory function to aircraft in flight.

He said aviation unions have carried along the Nigerian Labour Congress and Trade Union Congress along in the bid to reverse the ugly trend ; which seeks to muzzle aviation workers.

Nigerianflightdeck is an online news and magazine platform reporting business stories with a bias for aviation and travel. It is borne out of the intention to inform, educate as well as alter perceptions with balanced reportage.
Previous Inter- agency spat: ATCs in Kano plan to down tool as FAAN disconnects power over N500m debt
Next Heritage Bank appoints Acting Managing Director, Executive Directors