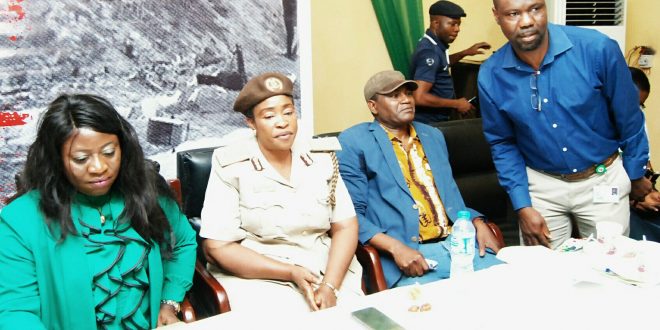 Archived: Chairman of the Committee on the Diaspora, the Federal House of representative of Nigeria, (Speaker at the occasion), Hon. Rita Orji (left): Deputy Controller of the Nigerian Imigration Service, Mrs Sadat Hassan: Publisher of the African courier Magazine and Director, MEPN, Femi Awoniyi and Director, African – Germany- information Centre (AGiC), and Chairman of the Nigerian in Diaspora, Hon. Keneth Gbandi, during the lunching of Migration enlightenment project/ press Conference in Lagos last year

ACCORDING to documentation, no fewer than 32,000 Nigerian Asylum seekers are in Germany and over 12000 are awaiting deportation from the European country according to a  group seeking to educate Nigerian youths on the hazards associated with illegal migration.

The Nigerians in Diaspora Organization (NIDO), Europe, African-German Information Centre (AGiC), Migration Enlightenment Project in Nigeria (MEPN), lawmakers and other stakeholders, have urged youths to desist from irregular and illegal migration to Europe, especially by sea, saying the hazards associated with it are devastating.

Deputy Controller of the Nigerian immigration Service, Mrs Sadat Hassan who gave a run down of the alarming statistics decried that Nigerians got to Europe by illegal means and most of them, if they get there, are exposed to the harshest of conditions bereft of representation when they fall into trouble.

Hassan, who was the immigration head in Germany gave vivid examples of hardships encountered by Nigerians in Europe, said ‘the hazards of the journey is not as bad as the one you will face when you get there, we see cases of rape, people jumping into the lagoon because they don’t want to be deported, we see pathetic cases of Nigerian youths in Germany’.

“So many Nigerians are in the prisons but not all are guilty, many have sold landed properties to travel out but met with the reality when they get abroad so be cautioned”, she added.

Director of AGiC and chairman of NIDO, Kenneth Gbandi, in his welcome address at the launch of  MEPN at Centre for Management Development (CMD), Shangisha, Lagos, said many of the girls who migrated illegally from Nigeria are killed on a daily basis either on sea or at destination, advising that ‘if you must travel, do it responsibly, there are alternatives to travelling out of the country.

“There are a number of businesses you can do in Nigeria, you can exploit all opportunities in Nigeria before you think of travelling out, it is risky to do it illegally, our youths are exposing themselves to various dangers. We are going to work with authorities to popularize Solar energy training programme and fashion designing and others to engage the youths. All we are saying is look before you leap”, he said.

MEPN is a project put together to raise awareness on the risks and dangers of irregular migration.

Project Director Femi Awoniyi, stated that this year alone, ‘more than 2, 500 migrants have perished in the Mediterranean according to International Organisation for Migration, many more are believed to have died travelling across the Sahara Desert or in transit countries’.

He said, ‘a great number of these irregular migrants are Nigerians’, adding that in Libya, many migrants seeking employments or trapped in transit are exposed to harsh living conditions, some are traded as slaves for ransom, labour or sex by gangs of human traffickers’.

Awoniyi , who cautioned that a new phase of struggle awaits those who survive the journeys through the Mediterranean as they continue to struggle to get legal residency, added that Nigerians have the highest rejection rate of asylum applicants made by Africans.

“The United Nations Refugee Agency and UNHCR report show that the applications made by 21,427 Nigerians were rejected last year alone, there are currently 12,000 Nigerians awaiting deportation in Germany as their asylum claims have been rejected”, he added.

Also speaking, Rita Orji, Chairman, House of Representatives Committee on Diaspora, lamented that some Nigerians are sentenced to several years of imprisonment abroad even when their parents think they are making it there, adding that what the youth called ‘greener pasture is not but bitter experience.

“Nigerians are actually facing the problem of migration as a result of pressure from parents and other relations, so many deported girls in Calabar are HIV positive, even if the situation in Nigeria is bad there are also unemployed person abroad. The fact is that if you stay in another man’s land illegally, you can’t defend yourself. I got a report that there are over 32, 000 asylum seekers in Germany, is it that bad?,  she asked.

Nigerianflightdeck is an online news and magazine platform reporting business stories with a bias for aviation and travel. It is borne out of the intention to inform, educate as well as alter perceptions with balanced reportage.
Previous NAAPE, ANAP to shutdown Nigerian airspace flights September 18
Next Etihad celebrates fashion event at Abu Dhabi with designer, Julien Macdonald