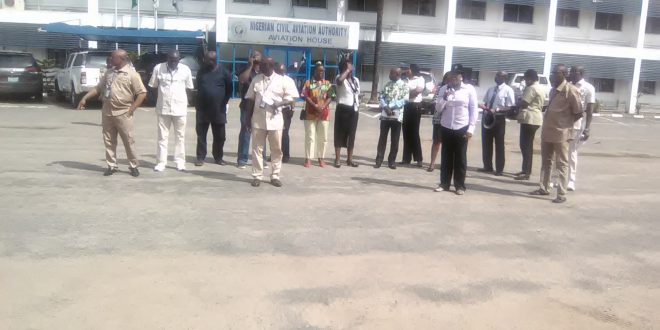 TWO affiliates of the United Labour Congress (ULC): National Association of Aircraft Pilots and Engineers (NAAPE) and the Association of Nigerian Aviation Professionals (ANAP) have notified the Federal Government through the Nigerian Civil Aviation Authority (NCAA) that they would ground the Nigeria’s airspace if their demands are not met before that date.

The unions gave the warning yesterday in a joint press statement on the strike called by the United Labour Congress (ULC), stating that the unions will embark on a strike action starting from 6am on Monday being September 18, 2017.

In the letter addressed to the Director General NCAA, Capt. Mukhar Usman, the unions lamented that government workers at all levels are owed months and years of salaries, pensions and various allowances stating that such situation will not continue in that manner.

While complaining that the government has been neglecting the review of minimum wage, the aviation unions added “The factories in Nigeria and most other workplace have been manufacturing depots for fatalities and various unimaginable incapabilities. Federal Ministry of Labour and Employment has since abandoned their inspectorate and surveillance duties in this respect thereby abandoning Nigerian workers to their fate”

“As a result of the strike action, no flight will operate through Nigeria. We therefore advise all airport users to take note and make alternative travel arrangements. Foreign airlines are equally advised to avoid flying into Nigeria until the matter is resolved to avoid unpleasant consequences”.

“We truly regret the difficulties this action will cause airport users, but this circumstance is foisted by the federal Government and the remedy lies solely in their hands”, the union noted.

Nigerianflightdeck is an online news and magazine platform reporting business stories with a bias for aviation and travel. It is borne out of the intention to inform, educate as well as alter perceptions with balanced reportage.
Previous Reactions trail airports concession as all agree on leaving the air side out
Next NGOs, experts advise youths on irregular migration