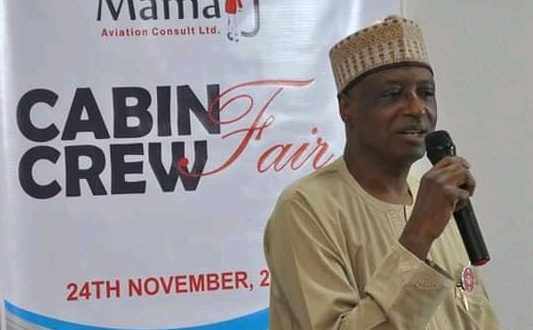 NIGERIAN College of Aviation Technology (NCAT) has concluded plans to introduce an automatic fire simulator in Zaria next year to replicate and train crew on fire emergencies.

This is just as the NCAT rector, Captain Abdulsallam Mohammed disclosed that the College, two weeks ago, graduated 40 cabin crew which had been added to the industry noting that the cabin crew that train in Zaria come out rated on the Boeing 737

Abdulsallam made these known in an interview with newsmen at the 2018 Cabin Crew Fair in Lagos organized by MamaJ Aviation Consult Limited, also added that the College has again been voted to receive the award as the institution with the highest number of instructors in the world for the third year running.

On the automatic fire simulator, Captain Abdulsallam said in Raising the bar of the Cabin Crew Profession by the College, the institution was introducing it to have crew get a better understanding of this kind of emergencies.

“On our part what we are doing to raise the bar in cabin crew training is that we are introducing an automatic fire simulator in Zaria next year the project will be completed, it is first of its kind in this part of Africa, we will be able to simulate scenario that are related to fire and smoke such as seat fire, cabin fire, lavatory and gale fire, so the cabin crew will be able to have a better understanding of these emergencies and become better trained”.

Abdulsallam who applauded the organizer of the cabin crew for coming up with such program to bring cabin executives together to brainstorm and network on how to take the profession to a higher level, said the turnout of people at the fair was a testimony that the Fair had imparted positively on the industry.

“Most definitely, I was pleasantly surprise by the number of people that turned up, virtually every seat is taken so that goes to show that more people are becoming aware of this and more people are showing interest and I believe that the organizer, MamaJ has done a good job and am sure that next year she will need a bigger space for this fair”.

Convener of the Cabin Crew Fair and CEO, MamaJ Aviation Consult Limited, Joy Ogbebo in her address of welcome observed that raising the bar of the cabin crew profession required that crew must strive to be above standards at all times.

She stressed that one of the ways to keep raising the bar of the profession was to create a feedback system and consistently review the processes for improvement.

Nigerianflightdeck is an online news and magazine platform reporting business stories with a bias for aviation and travel. It is borne out of the intention to inform, educate as well as alter perceptions with balanced reportage.
Previous NCAA warns airline operators, pilots on seasonal inclement weather
Next Dunoma assures on resolving thorny labour matters, commissions ANAP National Secretariat