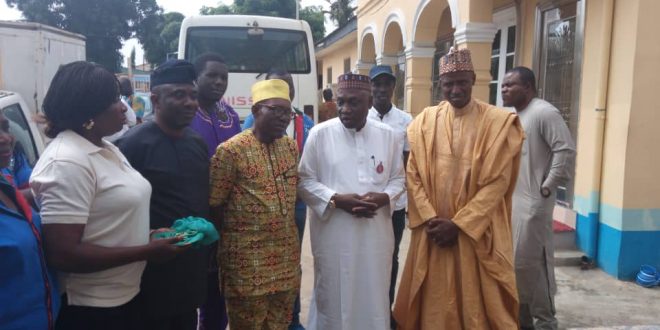 MANAGING Director of the Federal Airports Authority of Nigeria (FAAN), Engr Saleh Dunoma has said that due process will be strictly adhered to in resolving the stagnation and promotion of some workers in FAAN to ensure that the anomaly is rectified once and for all.

On the withdrawal of condition of service from the the salaries and wages commission as a result of delay in the implementation, Engr Dunoma advised ANAP to prepare a new one to be sent to the minister of State for Aviation for consideration.

Earlier, the secretary-general of ANAP, Comrade Abdulrasaq Saidu commended Engr Dunoma for his contributions towards the welfare of workers in the organisation.

Comrade Saidu appealed to the him to provide them with conducive space to build their national headquarters.

He explained that the union has been watching his fatherly role in resolving the issues of stagnation and promotion but noted that the salaries and wages commission was not up and doing in handling the issue of condition of service for workers of all the aviation agencies.

Saidu said the union will be forced to protest the removal of those in the salaries and wages commission that were stumbling block to the full implementation of the condition of service.

Saidu commended the FAAN boss by rewarding what he called human dignity by providing the office for the union.

Nigerianflightdeck is an online news and magazine platform reporting business stories with a bias for aviation and travel. It is borne out of the intention to inform, educate as well as alter perceptions with balanced reportage.
Previous NCAT to introduce automatic fire emergency simulators for crew training
Next Emirates Group announces AED 48.9 billion half-year performance for 2018-19