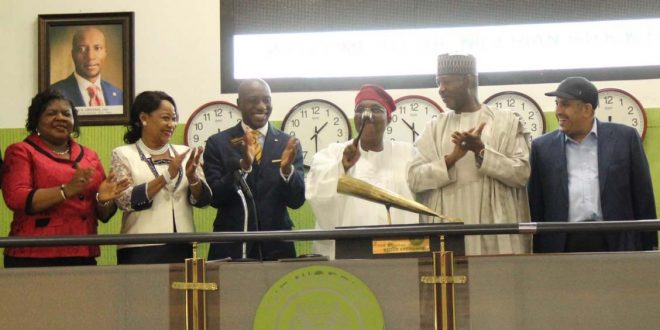 This is just as the airline also stated that it is projecting  growth despite challenges in 2020 with a revenue growth forecast of N58.5billion, improving on its growth from N3.6billion turnover when it commenced to N26b in the last five years ending at 2016.

Med-view Airline Chief Executive, Alhaji Muneer Bankole made this known at the floor of the stock exchange after the sounding of the closing gong making Med-View the first airline in 24 years to be admitted into the  stock market after airlines like Albarka and ADC were admitted and later de-listed for sundry reasons.

According to Onyema, Medview’s listing reaffirms  the belief that in spite of several policies and economic challenges facing the nation, the NSE remains one of the best avenues for raising capital and enabling sustainable growth for national development.

He also decried the challenges that have in the past decade led the Nigerian aviation industry to experience a downward spiral leading to the exit or decline of many operators stating that this has also impacted significantly on passenger traffic for inbound and outbound destinations but commended Medview for the courage to take the step.

Onyema said,”Today’s listing by Introduction of 9.75Billion (9,750,649,400) ordinary shares of Med-View Airline on the Main Board of The Nigerian Stock Exchange at a Listing Price of N1.50 Per Share is a culmination of several months of hard work by all parties to the transaction including the Securities and Exchange Commission and The Exchange. “

“This listing has added N14.65b (N14, 625,974,100) to the market capitalization of The Exchange, further deepening the Nigerian Capital Market. It will also increase the visibility of Med-View Airline Plc and differentiate it as a professionally run airline with high corporate governance standards, having met The NSE’s listing criteria,” he said

“ We encourage other participants in the aviation industry value chain to look seriously at leveraging the opportunities that abound in the Nigerian capital market. We also call on the Hon. Min. of

Alhaji Muneer Bankole who responded questions from stakeholders and the media, explained that Med-View got where it did through commitment, hard work and dedication to its passengers who are the key reason they have risen fast since inception of scheduled operations in 2012.

According to the Med-View CEO, the airline’s customer-centric focus has distinguished it amongst its peers.

The airline boss further promised to keep raising the bar for customer service and on time departure, which he said are key ingredients to Med-View’s success.

He thanked the NSE boss stating that reasons why it chose to go into the stock market were predicated on the stand that:”being listed enhanced the corporate value and brand image of Med-view, enables the airline better access to long-term capital from a wide range of local and international investors.”

“Being listed also gives better clout and rating when obtaining loans from financial institutions, boost the airline’s international image and profile as well as improve corporate governance and accountability.”

Nigerianflightdeck is an online news and magazine platform reporting business stories with a bias for aviation and travel. It is borne out of the intention to inform, educate as well as alter perceptions with balanced reportage.
Previous SAA celebrates Abuja-Johannesburg first anniversary with free Business Class tickets
Next Former SAHCOL helmsman becomes new ASSO President