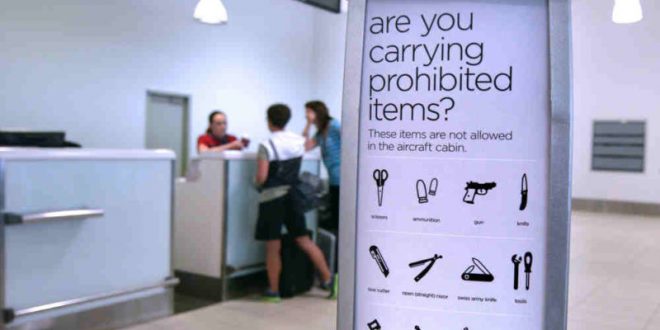 How to handle dangerous items when traveling by air

WHAT is considered a safe item to travel with when a passenger wants to travel by air? What objects can you travel with on board the aircraft or which do you have to check-in? Or have as carry-ons?

When embarking on a journey by air, it is important to know that it is the travellers’ responsibility to make sure what he/she is packing doesn’t pose a risk to and other passengers.

In airports across the country, I have watched as security personnel stop one or two people embarking on a flight asking them to drop some items deemed dangerous for air travel and this brings us to our topic today on Travel Tips, dangerous goods.

What are dangerous goods? Dangerous goods are items or substances that when transported by aircraft are a risk to health, safety, property or the environment and they vary from the commonest items to the most conspicuous.

Items that are classified as dangerous and will not be allowed into an aircraft include obvious things, such as: explosives, radioactive materials, flammable liquids, dangerous or volatile chemicals, strong acids, compressed gases, poisons and aerosols.

Everyday items that can cause problems include firearms, knifes, toiletries, aerosols, tools and lithium batteries.

Anywhere in the world, it is frowned upon to take sharp objects on board an aircraft in a carry-on bag. It is a no-brainier that objects or weapons with sharp edges like axes, ice picks, razor blades, box cutters, hatchets , arrows, darts, swords, Sabres, scissors, harpoons cannot be brought onboard the flight and this is for safety reason.

In the United States of America, the Transportation Security Administration (TSA) require that a firearm cannot be allowed onboard but can be packed in a hard-sided container that is locked with the container placed in the checked in luggage, if knives and other sharp objects cannot be brought on your carry-on bag; then neither can a gun.

And since safety is everyone’s responsibility, failing to declare dangerous goods can result in fines or imprisonment.

What items can you fly with and how can they be packaged?

Liquids and Gels. You may only carry on liquids and gels that are in 3.4-ounce containers or smaller. Liquids include toiletries such as shampoo, after-shave, hand or body lotion, mouthwash and liquid makeup. Toiletries often found in gel form include toothpaste, deodorant and lip balm or lipstick.

Lithium batteries:
These battery can eventually hit temperatures of more than 1,000° F. At that point the flammable electrolyte can ignite or even explode when exposed to the oxygen in the air. Will these catastrophic failures, rare though they may be, spell the end of theLi-ion battery.

Tags How to handle dangerous items when traveling by air

Nigerianflightdeck is an online news and magazine platform reporting business stories with a bias for aviation and travel. It is borne out of the intention to inform, educate as well as alter perceptions with balanced reportage.
Previous Sokoto runway incursion: The need to caution political leaders
Next NAHCO posts N4.6 billion half year turnover, signs strings of contracts