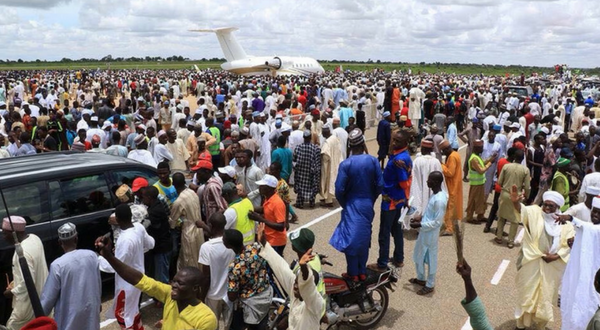 LAST Friday, a crowd of supporters of former governor of Sokoto State, Aliyu Wammako invaded the Sultan Abubakar Sadiq 111 Airport, Sokoto, flagrantly breaking all airport security rules with no one to hold them back.

The situation, a political statement of sorts, was intended to deliver a message to political opponents. It did indeed deliver a message, albeit the wrong one to the international community portraying the Nigerian aviation sector as unsafe and unsecure.

The crowd, without any hinderance gained unauthorised access to the safety critical areas of the airport, including Runway, Taxiway and Apron and were seen even riding motor bikes around the aircraft and frolicking around to welcome the former governor.

Sadly, this is how politics has been destroying the aviation sub-sector for countless years and this is due to the fact that all the authorities involved do not have any plan or protocol in place to halt these kinds of mindless acts liable to cost the country immensely.

Nigerianflightdeck.com frowns heavily at the state of security at the nation’s international gateways and at the lack of legislation or enforcement of such legislation, if any, against such situations.

On countless occasions, crowds have been let into the secure areas of the airport from the time when former President Olusegun Obasanjo would come to Lagos and the much vaunted Presidential Wing became an area of funfest and jamboree where political acolytes and party members came to hobnob and outdo each other with their paid praise singers .

Government did not take all those security breaches then into consideration when during the President Goodluck Jonathan tenure, it sent the press Corps that used the VIP Lounge as office out for being ‘security risks’ yet the breaches still continue.

Then there have been more current breaches like in December 2015 where aggrieved passengers of Turkish Airlines overpowered security and gained access to the airside to barricade the airline’s aircraft, denying them boarding over luggage.

This current assault on aviation by politicians in Sokoto is also preceded by a similar situation in Bauchi where a crowd of same magnitude invaded the airside frolicking all over the place.

At Sokoto, FAAN AVSEC lost total control of the security and the police there were at sixes and sevens as to how yo handle the situation simply because they have not planned for such a situation in the past plus they now view airport incursion as a norm.

In truth, the situation would not be so if all the airports had strong access control including a perimeter fencing to keep miscreants of any sort out of the secure area, therein lies the responsibility to FAAN which does not even have adequate manpower to handle that tumultuous crowd.

It is when things like this happen that the porous nature of our security apparatus is exposed and people find loopholes to beat the already weak system.

We, as a nation, are lucky these sort of political gathering have not led to any vandalism or casualty around the airport or even worse the secret planting of Improvised Explosive Devices (IEDs) on safety critical infrastructure ( aerodromes or aircraft) for this reason alone eternal vigilance must be the watchword and these kinds of actions must have consequences especially on the political figure who cannot rein in his/ her acolytes.

The NCAA is not to be spared as it is their job to ensure that all service providers and agencies play by the rules all the time. It took the agency five days to react to the Sokoto incident, and scream sanction like a sanction spitting dragon.

Unfortunately, the regulatory authority has not responded well and on time begging the question, what was it waiting for to react? Was the NCAA, supposedly free of government intervention, waiting for order from above before it came out with a statement or commenced investigation? And what has happened to the airport? Or those who work there as detente?

The scenario in Sokoto affects the country and keeps its aviation in the black ensuring that airline’s registered in Nigeria cannot get reasonable and affordable insurance premium because the nation is termed a ‘risk’ as foreign insurers will continue to complain of poor oversight, as is the case with what happened there.

Nigerianflightdeck.com strongly condemns last Friday’s breach and calls on government to enact laws to make sure public officials, political figures and the likes are held accountable for acts tantamount to destroying the economy, because with all that has happened there will be an economic repercussion and the airline’s would be the first to feel the impact followed by passengers.

There are also teething problems that government need to address apart from ensuring that there is perimeter fence at all airports, there must be a security protocol in place to keep unwanted crowd like those who came for former governor Wammako away from the airside.

Nigerianflightdeck.com also calls on all agencies, NCAA, FAAN, NAMA as well as security apparatus’ at the airports: DSS, Nigeria police and other to work assiduously together and take responsibility for the breach in the system.

Most importantly, if there are no examples with regards sanctions these sort of breaches would continue unabated, which will dent further, the country’s aviation sub-sector.

The airport Authority and the regulator must role out a campaign in all languages Nigerians can understand to tell the general public that the airport, because of its critical nature, cannot be a place to play politics.

Nigerianflightdeck is an online news and magazine platform reporting business stories with a bias for aviation and travel. It is borne out of the intention to inform, educate as well as alter perceptions with balanced reportage.
Previous NCAA licenses another MRO facility, 7 Star Global Hangar
Next How to handle dangerous items when traveling by air