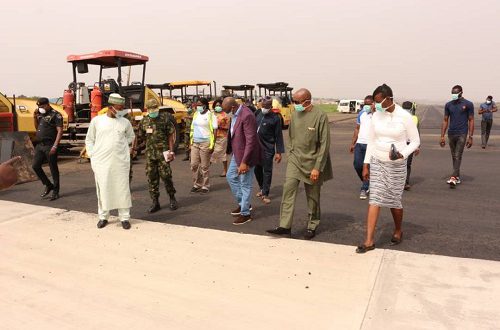 THE effects of the dreaded COVID-19 pandemic seems to be spreading its tentacles as the latest casualty is the Akanu Ibiam International Airport (AIIA), Enugu as the Minister of Aviation, Senator Hadi Sirika has regretfully announced Federal Government’s  inability to meet up the deadline suspending reconstruction work.

The Minister disclosed this after an inspection tour of the project, earlier today Tuesday (March 31, 2020), attributing the decision to suspend to the global effects of the COVID-19 pandemic.

Sirika who arrived the airport with Managing Director of the Federal Airports Authority of Nigeria (FAAN), Captain Rabiu Yadudu aboard a police chopper with registration number 5N-LEH explained that the project, which had gone beyond 90 per cent, would have been delivered in six to seven days but that the workers had to leave to be with their families in these trying times.

He said, “Considering that the construction workers have downed tools owing to the COVID-19 pandemic, the Federal Government, hereby, officially announces suspension of procurement. The work would have been completed in six to seven days, but the workers left to be with their families in view of the social distancing,” the minister stated.

While appealing for understanding on the part of the South-East people, the minister expressed the hope that the issues would be resolved in two to three weeks.

Nigerianflightdeck is an online news and magazine platform reporting business stories with a bias for aviation and travel. It is borne out of the intention to inform, educate as well as alter perceptions with balanced reportage.
Previous COVID-19: Cross River govt. prevents US oil workers entry over pandemic scare
Next FAAN disinfects NAIA International terminal to aid fight against COVID-19