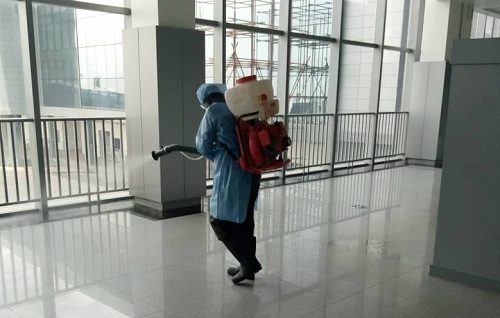 This is just as the airport managers are currently disinfecting the General Aviation Terminal (GAT) with plans to carry out similar exercise at the domestic terminal tomorrow.

Regional Manager, North, FAAN, Sani Mahmoud who spoke briefly on the works been done said that the entire international terminal has been disinfected from offices to lounges as well as all the restricted areas, stating that the airport authority has the interest of ending the scourge at heart.

Mahmoud explained that the terminal being closed to traffic makes it easy to reach every nook and cranny and stated that the disinfecting exercise that will be replicated all over the airports, domestic and international and despite the close of the airports.

He hinted that the chemicals used to disinfect the terminals are World Health Organisation (WHO) certified,  stating that without people it would be easier to fight the virus as the coronavirus doesn’t move but is carried around by people who touch surfaces; Mahmoud explained that without people carrying it around the virus if there can be killed through the sanitization.FAAN disinfects MMIA, others to curb spread of COVID-19

Recall that FAAN March 23, 2020; commenced disinfecting of major airports with the Murtala Muhammed International Airport using the opportunity of the airport closure nationwide to ensure the terminals are sanitized against infection.

Meanwhile, Mahmoud has hinted that apart from the disinfection of the domestic terminal of the NAIA tomorrow, the  airport managers will carry out routine pest control fumigation around the airports too.

Nigerianflightdeck is an online news and magazine platform reporting business stories with a bias for aviation and travel. It is borne out of the intention to inform, educate as well as alter perceptions with balanced reportage.
Previous COVID-19:  FG regrets inability to deliver Enugu International Airport on schedule
Next COVID-19: Flight safety Foundation insists on operational safety despite reduced operations