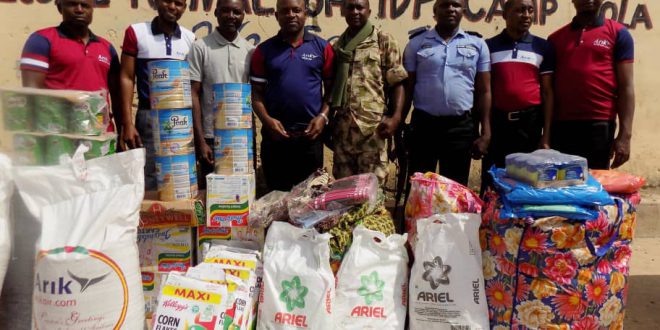 The airline made the donations​ on Sunday donated.

The items were presented on behalf of the airline by Andrew Odion, head marketing Central West Africa (CWA), Bako Abubakar, Yola station manager and some other staff in Yola.

Commenting on the airline’s kind gesture, Fatima Hassan was elated and thank the airline for being a caring airline. She noted that despite the challenging situation in the country, the airline still deemed it fit to touch lives.

Also in showing his appreciation, Peter Paul, the Camp Manager implored the​ Arik Air team to extend their appreciation to the management of the airline.​

He added: “We pray for the prosperity of the airline for it to succeed and continue to soar higher. We hope other airlines in Nigeria will emulate your good works.”

He​ promised that​ the items will be judiciously used for the benefits of all the displaced persons.​

Nigerianflightdeck is an online news and magazine platform reporting business stories with a bias for aviation and travel. It is borne out of the intention to inform, educate as well as alter perceptions with balanced reportage.
Previous FAAN assures of comfort, safety as Yuletide approaches
Next NAHCO scoops two prestigious aviation industry awards