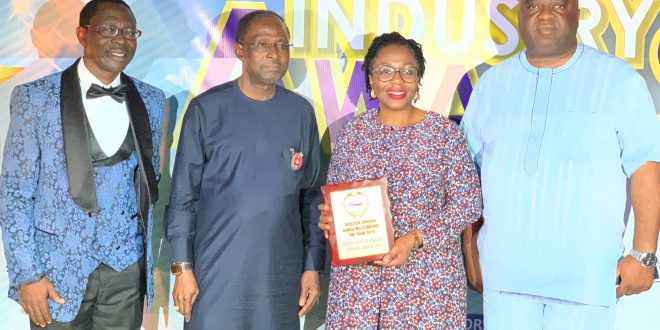 NIGERIAN Aviation Handling Company Plc (nahco​ aviance) over the weekend scooped two of​ Aviation​ industry’s​ most prestigious awards within 24 hours of each other.

In a manner unprecedented in the annals of the Nigerian aviation industry, NAHCO was declared the Air Transport Awards’ Ground Handling Company of the Year 2019 on Friday, December 13, 2019. 24 hours later, on Saturday, December 14, 2019, the Company was also announced the winner of the NIGAV Awards Ground Handling of the Year Award, 2019 at the Oriental Hotel, Lagos.

The Awards​ are widely seen as part of early​ results of the transformation agenda which the Board of the Company instituted early this year.

According to the organisers of the Air Transport Awards, the Industry cannot but note with admiration,​ the​ energized strength of the Company in its continued domination of the Company.

“We are indeed proud of what NAHCO has been able to achieve in the Year 2019. It is not possible to overlook the way the company has bestriddenthe ground handling landscape this year. Its leadership role in the nation’s aviation sector should also be well applauded,” the organisers said in a citation read at the Welcome​ Centre​ venue of the Awards ceremony.

The NIGAV Award organisers had nothing but commendation for NAHCO for its excellent and widely acknowledged exceptional service delivery.Speaking for the organisers, Mr. Forutne Idu said the history of Nigerian aviation would not be complete without NAHCO.

Commenting on the achievements, the Group Managing Director/CEO of the​ NAHCO, Mrs. Olatokunbo Fagbemi, said the awards are dedicated the Company’s ever trusting and loyal clients and its shareholders who have always given it​ the required​ support.​

She stated, “We would not have been able to achieve this without our loyal clients who trust and believe in our ability to give them the best; and our ever supportive shareholders. These awards are dedicated to them.”

In his own remarks, the Manager, Corporate Communications and Services of the Company, Mr. Tayo Ajakaye said considering the way and manner the Company had shown resilience this year, the Awards could not have gone any other way. He said the ground handling experience which the Company serves its clients could not be got anywhere else.​

It would be recalled that​ NAHCO, in 2019 embarked on a modernization​ process​ of its warehouses in Lagos which​ saw it expand the Export Warehouse​ by several square metres to create space for expanding cargo export​ and the refurbishment of its Import Warehouse.

The Company also invested billions of naira in equipment purchase in the outgoing year.

Winning awards is second nature to NAHCO. Its long list of awards include the Global Risk Award 2016 in UK where the Company won the Excellence in the Face of Adversity Award; ​ NIGAV Award, 2018, for Best Airport Ground Handling​ Company​ Award;​ African Corporate Leadership Excellence Prize, 2018; and the International Trophy for Quality, 2018 awarded by Global Trade Club, Madrid, Spain.

Other awards are the Aviation Handling Company of the Year, 2017, awarded by Nigeria Transport Awards; The Best Air Cargo Handling Company, 2017 awarded by Sub – Saharan Enterprise; and ​ the Most Congenial Award given by the Association of Foreign Airlines and Representatives in Nigeria in September 2019.

NAHCO recorded an impressive revenue in excess of 9.8 Billion for the 2018 financial year.

Nigerianflightdeck is an online news and magazine platform reporting business stories with a bias for aviation and travel. It is borne out of the intention to inform, educate as well as alter perceptions with balanced reportage.
Previous Arik Air donates relief materials to Malkohi IDP Camp Yola
Next MAPOLY Mass comm graduates donates multi-media equipment to school, elects maiden excos team