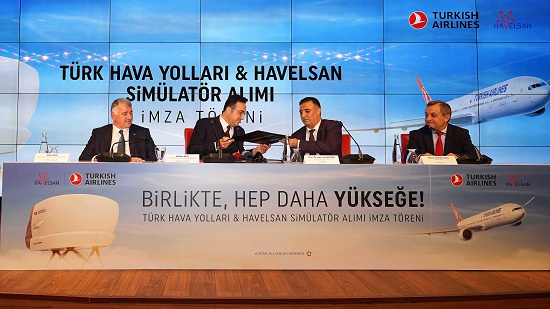 M. İlker Aycı, Chairman of the Board and the Executive Committee, Turkish Airlines, and Prof. Dr. Hacı Ali Mantar, Board Chairman HAVELSAN, at a special ceremony held at Turkish Airlines Headquarters.

TURKISH AIRLINES has signed a new agreement with HAVELSAN to produce the first domestic simulator to be used in pilot training for Boeing 737NG. This was done in continuation of its support for the further expansion of Turkey’s domestic and national production concept.

The agreement was signed between M. İlker Aycı, Chairman of the Board and the Executive Committee, Turkish Airlines, and Prof. Dr. Hacı Ali Mantar, Board Chairman HAVELSAN, at a special ceremony held at Turkish Airlines Headquarters. HAVELSAN will produce full-flight simulators with international D-level certification for the national flag carrier airline’ Boeing 737MAX and Airbus A320CEO/NEO type aircrafts.

According to the agreement, Turkish Airlines, with 14 simulators in its fleet, will receive international D-level certified 5 ‘Full Flight Simulators’ as 2 Boeing 737MAX and 3 Airbus A320CEO/NEO, and 6 ‘Flight Training Devices’ from HAVELSAN will go into operation in 2020 and 2021. Thus, while the number of Full Flight Simulators in Turkish Airlines Flight Training Center will reach 28 with the other simulators to be received in 2021, the first domestic production of Boeing 737MAX and Airbus A320CEO/NEO type simulators will also be included in this number.

This intitiative will reduce foreign dependency and remarkably accelerate the concept of domestic production. EASA D-level certified Full Flight Simulators will also enable Turkish Airlines pilots to get their adaptation, evolution, and renewal trainings at low costs and in a realistic manner. This will be delivered to Turkish Airlines’ ever-expanding fleet, by Turkey’s prominent defense and aerospace company, HAVELSAN, who has combined its simulator design, production, integration and maintenance experience in the military field with civil aviation.

Commenting at the signing ceremony, M. İlker Aycı, Chairman of the Board and the Executive Committee, Turkish Airlines said, “As the two major players of Turkish Civil Aviation, Turkish Airlines and HAVELSAN, we are very excited to have launched such a meaningful cooperation today. With the awareness of being the national flag carrier of our country, as Turkish Airlines, we are proud to have further developed our support for the domestic and national production, by turning towards the domestic resources.”

“These new simulators to be delivered in forthcoming years, will enable Turkish Airlines pilots to continue their training at the best standard, and also be experienced by the pilots of foreign airlines who prefer our flight training center for their refresher trainings. These simulators, which will have been seen also in the global market in this way, will also play a remarkable role in further increasing the global recognition of Turkish Airlines flight experience, which has already been a highly prestigious aviation brand today.”

Noting that the existing cooperation between the two brands will be increased with this agreement, Prof. Dr. Hacı Ali Mantar, Board Chairman, HAVELSAN said, “Now our country has made a distinguished name for itself around the world with the investments it has made in the areas where it has gained technological superiority. We believe that our cooperation with our flag carrier airline, Turkish Airlines, will grow rapidly in the environment of trust and solidarity. Thanks to these new flight simulators and training systems to be designed and produced by HAVELSAN, we will be able to satisfy the needs in this regard by turning towards domestic resources instead of foreign resources. At the same time, we will have the opportunity to export both system and training to the world airline simulator market with this project.”

Simulators come to the forefront as one of the most important factors to improve the quality of pilot training. The pilots are trained in the simulator after the ground lessons in the types of aircraft that they will fly. After completing the simulator training, which has changing duration according to the type of aircraft and the pilot’s experience, pilots can fly the aircraft. In civil aviation, pilots are also flying in simulators to renew their competence/ capabilities every 6 months. During this training, pilots are provided with emergency training under all kinds of environmental conditions. Thus, while the potential risks are minimized, the level of competent education is raised.

HAVELSAN took action to meet the increasing demand of pilot training in the Turkish Civil Aviation industry under the leadership of Turkish Airlines. In addition, the national flag carrier of Turkey targets to be a key player in civil aviation sector as well, as it has already been in the military field. The company also aims to gain a significant place in the world civil simulator production market with the production of Boeing 737MAX and Airbus A320CEO/NEO type simulators.

Nigerianflightdeck is an online news and magazine platform reporting business stories with a bias for aviation and travel. It is borne out of the intention to inform, educate as well as alter perceptions with balanced reportage.
Previous Dana Air completes NCAA re-certification exercise, to acquire more aircraft in 2019
Next ICAO deepens interest to partner Nigeria on Aerospace University, Aviation Security