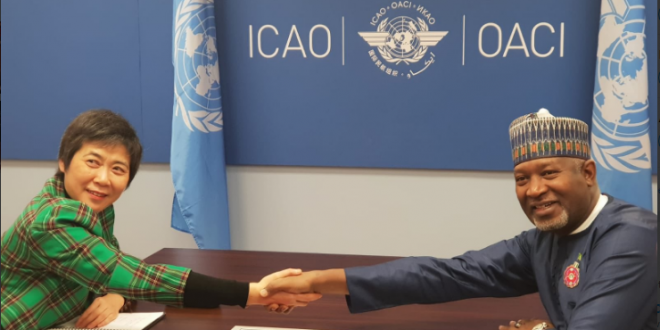 Caption:L-R: Dr. Fang Liu, ICAO Secretary General and Sen. Hadi Sirika, Nigeria’s Minster of State for Aviation during a meeting, discussing ICAO’s support for Nigeria on establishment of Aerospace University and others at ICAO Headquarters in Montreal, Canada recently.

INTERNATIONAL Civil Aviation Organisation (ICAO) has indicated serious intent to partner with the Federal Government of Nigeria in establishing an Aerospace University and support for the upgrade of aviation security.

Federal government made this announcement stating that the global aviation regulatory agency, is also offering support on capacity building, employment and internship.

The Minister of State for Aviation, Sen. Hadi Sirika made the disclosure on the partnership after his meeting with the ICAO Secretary General, Dr. Fang Liu in her office at the ICAO Headquarters in Montreal, Canada.

The minister who gave the information through his twitter handle @hadisirika wrote: “ICAO to support Nigeria on Aviation Security, capacity building, employment & internship and establishment of Aerospace University.”

According to the minister, the United Nation aviation agency, ICAO is also offering support on capacity building, employment and internship.

Establishment of an Aerospace University and the Improvement in Aviation Safety and Security through upgrade and modernization of Aviation Infrastructure and facilities are parts of the aviation roadmap for the country under the supervision of the minister.

In the effort to upgrade the security apparatus at the country’s airports, Sirika hinted at the 5th Aviation Stakeholders meeting in Abuja that the Federal Government has approval the bearing of arms by personnel of Aviation Security (AVSEC) to enhance the National Civil Aviation Security Programme (NCASP).

Nigerianflightdeck is an online news and magazine platform reporting business stories with a bias for aviation and travel. It is borne out of the intention to inform, educate as well as alter perceptions with balanced reportage.
Previous Turkish Airlines, HAVELSAN sign deal to receive flight simulators
Next Combating extortion and touting at immigration offices – Ikoyi passport office experience