NigerianFlightDeck 31st May 2019 Points of View, Your ViewPoint Comments Off on Sirika’s commissioning of airport facilities nationwide 163 Views

SHORTLY before the termination of the first tenure of President Buhari – led Federal Administration in May this year, the Minister of State for Aviation, Senator Hadi Sirika took a vivid look at the last four years in the aviation sub-sector and graphically enumerated achievements of the government just as he undertook a tour of the six geo-political zones of the country to commission completed aviation projects.

With very delighted heart, the minister revealed a score card which showed that the present administration during its first tenure recorded milestone achievements in the industry especially in the execution of priority projects relating to safety and security.

Before embarking on his airport tour, Sirika had, during the 6th Aviation Stakeholders’ Forum held Friday, 17th May, 2019 explained that government since 2015 when it took over; embarked on 157 projects in the industry and has in its four years, completed 134 of those projects 100%

He told the gathering that of the remaining projects, 14% are above 50% complete while 13% are below 50% complete giving an 80% delivery rate of the projects set about.

He commenced with the commissioning of two (2) Projects from FAAN, including the Aviation Security (AVSEC) Training School in Lagos before he went to commission the FAAN Aviation Clinic.

The Aviation Health Centre equipped with a state-of-the-art laboratory service has been transformed to run General Out-patient services, Hypertension and Diabetes Mellitus Clinic, Maternal and Child Clinic, Eye Clinic, Dental Clinic, Food Handlers and Environmental health clinic. The features include a robust and active internal pharmacy as well as a retail pharmacy.

After the launching of the Passengers Electronic Information Platform which displays the Passengers Bill of Rights in Lagos, the aviation minister commissioned the CCTV Surveillance System (Lagos-HQ Annex).

The Electronic Information Platforms are 30 in number scattered around the nation’s airports; aimed at helping to reduce or eliminate fracas borne from lack of information.

The Minister was also in Ibadan where he commissioned the remodeled Ibadan Airport Terminal Building before he went to Benin Airport to commission critical landing equipment installed by NAMA to enable night flights and flights during poor visibility at the airport.

The minister commissioned the Precision Approach Lighting System and Instrument Landing System Category II. With this, the operational capacity of the Benin Airport has improved tremendously as it will no longer be closed to flights by 6pm.

The Minister who further hinted at plans to cite an Agro-allied Cargo Terminal at the Benin Airport revealed that the Federal Ministry of Transportation (Aviation) through Nigeria Meteorological Services (NiMET) constructed and donated a meteorological station to the University of Benin (UNIBEN).

Sen. Sirika in Abuja inaugurated a 10 Megawatts (MW) Independent Power Plant for the Nnamdi Azikiwe International Airport; Abuja to complement the power needs of the airport as well as other critical projects for the airport.

He said, “There was a lot of planning deficiencies identified with the new terminal because they didn’t take into cognizance the issue of power deficiency. In response to address this deficiency, we commenced this project amongst many others. This independent power plant is part of the deficiency of the airport that has been rectified just now.”

He was on ground to inaugurate the Accident Rescue and Resuscitation Centre which is the first of its kind in the airport and also inaugurated the Terminal D of the domestic wing of the airport which was rehabilitated between 2017 and 2018 as well as the fire watch tower for the General Aviation Terminal (GAT) before inaugurating the Nigerian Meteorological Agency (NiMet) Central Store at the upper Air Hydrogen Shed Premises.

From Abuja, he jet off to the North western state of Kano where he inspected another of the US$600million Chinese-Nigeria funded terminals and declared it 90% complete and soon to be commissioned and put to use.

He also inaugurated the new General Aviation Terminal at Mallam Aminu Kano International Airport executed by FAAN, the new Regional offices of AIB and NiMet for the Northwest as well as the Instrument Landing System (ILS) and DVOR equipment executed by NAMA at the airport. 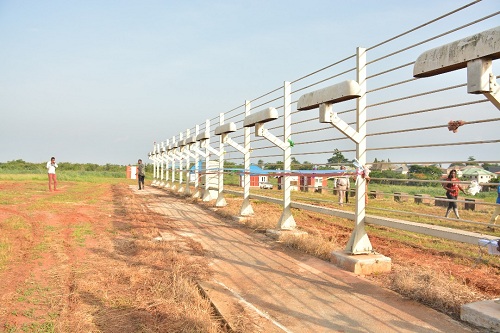 According to him, most of the projects left are in excess of 50 per cent completion while only few are below 50 per cent completion, stressing that government will put up maximum effort to meet the yearnings of the flying public and Nigerians in general by having in place those visible and invisible safety critical elements for safe operations.

“These things that we do in aviation most of them are not things that the passenger or traveling public can notice and see because they are remote away from sight but they make aviation very safe and secure and also in addition very precise,” he said.

After a brief hiatus, because of plans to hand over the Minister recommenced his inspections also moved to another North West state of Kaduna, Zaria as well as the North Eastern state of Maiduguri where he inaugurated where he inaugurated some NAMA, NiMET, NCAT and NCAA projects ( North West ) while he inspected and commissioned FAAN solar Air Field Lightining, Apron Flood Lighting in Maiduguri ( North East).

In Kaduna, the Minister also commissioned AVIA and Associated Equipment and also commenced to Zaria to inaugurate the Aviation Weather Observation Station (AWOS).

Sirika said, “Training is number one safety issue, once you have well-trained personnel, then you have guaranteed safety and this industry of ours is about safety of operations. You can only ensure maximum safety when you have a well-trained aviator, whether it is a pilot, engineer, traffic controller or cabin crew.

“The focus of this administration is to ensure that this institution has grown to where it is and beyond. Currently, it is a regional training centre of excellence for International Civil Aviation Organisation (ICAO) and most of the projects we have inaugurated were started during this administration. Just recently also, we bought a fire fighting simulator worth about N5.2 billion to be installed here in Zaria for training purposes,’ he said.

“These things that we do in aviation most of them are not things that the passenger or traveling public can notice and see because there are remote away from sight but they make aviation very safe and secure and also in addition very precise,” he said.

Nigerianflightdeck is an online news and magazine platform reporting business stories with a bias for aviation and travel. It is borne out of the intention to inform, educate as well as alter perceptions with balanced reportage.
Previous FAAN MD, airline operators brainstorm on improving service, others
Next Heritage Bank empowers ‘HB Lab’ tech start-ups’ winners with $40,000 grants