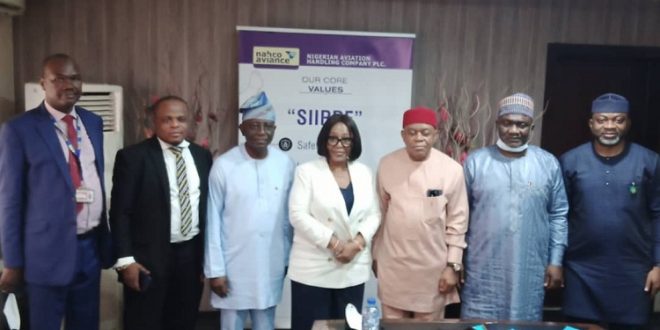 Senate Committee on Privatization, led by Chairman, Senator Theodore Orji and Management of NAHCO PLC, led by Group Managing Director Mrs. Tokunbo Fagbemi during an oversight visit of the former at NAHCO headquarters in Lagos

CHAIRMAN, Senate Committee on Privatization, Senator Theodore Orji  has  expressed willingness to bring  some major challenges of  ground handling giants, Nigerian Aviation Handling Company  NAHCO PLC) to the floor of the Senate to address them

Senator Orji made this known during an Oversight visit to the handling company’s headquarters stating that the committee’s function is to access situation with privatized entities and intervene where there is need to, to ensure their operations are fluid.

Senator Orji addressing the media after a session with the NAHCO PLC management said,” We have come for oversight functions on Nigerian Aviation Handling Company NAHCO (PLC). How they are faring, their constraints and how the committee can intervene to help them.

“My take on the company is that I’ve seen it and commended the group managing director, they are doing well, within the presentation you see the revenue before and you see the revenue now, you see they are trying, it is not easy especially during this COVID period and their areas of operations is so wide that is our impression

On the handling company’s prayers he said,”If you look at their presentation, the last page titled our prayers: this contains their constraints and mostly, its government that would solve these problems for them not themselves, they will try but majority of the solution is on government.

“So we will carry this along and do our bid and I’m sure that the relevant agencies and government parastatals will know about this. One of the things we’ve come here to do is find out their problems so we can intervene, everywhere we have gone to this is the objective. Find out their problems; find out how we can help, access them whether they are doing good or bad

Group Managing Director of NAHCO PLC, Mrs. Tokunbo Fagbemi who hosted the committee expressed optimism that the committee would take their prayers seriously.

According to her, the crux of their prayer is for the works started on the Civil Aviation Act to be completed as that would pave way for benefits enjoyed by the airlines to trickle down to handling companies who are dependent on them.READ ALSO: Experts decry inappropriate handling charges; insists only right pricing can sustain business

She said,” one of the things we’ve asked for is that the Civil Aviation Act, the work started on it be completed as soon as possible because we believe that would open up opportunities in within the civil aviation industry and we support airlines in the same industry so whatever benefits the industry ultimately will trickle down to us.

The NAHCO boss also said the management discussed the possibilities of granting waivers, 10% interest loans like airlines as well as tax incentives to give the handling company parity as it also buys its equipment in foreign exchange and doesn’t have the luxury of converting them when the game changes

Fagbemi said,”One of the things we discussed and we want government to look at is, where we can have waivers on duties just like the airlines have it, we can have some tax incentives and tax relief. We are also looking at below 10% interest rate borrowing similar to what the airlines have because we also buy our equipment in foreign exchange.

“ It is even worse off for us, an airline can sell its aircraft we can’t sell our equipment; they can choose to convert the aircraft from passenger to freighter but we are stuck with the equipment, when an equipment life I exhausted we just scrap it.”

Nigerianflightdeck is an online news and magazine platform reporting business stories with a bias for aviation and travel. It is borne out of the intention to inform, educate as well as alter perceptions with balanced reportage.
Previous Air Peace crew gets award of excellence for foiling in-flight theft
Next Arik Air resumes Warri with Abuja, Lagos as airline moves Benin, Warri flights to MMA2