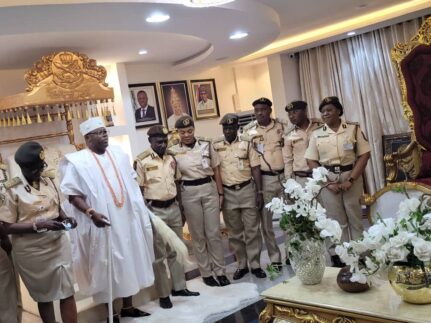 The Oniru of Iruland, His Royal Majesty, Oba Abdulwasiu Omogbolahan Lawal, Abisogun II in a group photograph with the Comptroller General of Nigeria Immigration Service Isah Jere Idris and top brasses of the Service during the courtesy visit

At a recent function, The Oniru of Iru land, His Royal Majesty, Oba Abdulwasiu Omogbolahan Lawal, Abisogun II commended the reforms at the Murtala Muhammed International Airport ( MMIA) as initiated by Comptroller General of Nigeria Immigration Service, Isah Jere Idris stressing that on the last three months the NIS in that command has shown character.

The first class monarch gave this commendation during a courtesy visit of the Comptroller General to his palace stressing that as a regular traveller he has observed the changes and is sure many Nigerians have too.

Oba Lawal who said the tenure of the Idris has brought significant reforms to the Service across the nation, noted that the reforms instituted at Lagos Airport command of Service is outstanding and deserves commendations.

He noted, “There have been many reforms put in place in the operations of Nigeria Immigration Service (NIS) in the past, but the reforms you have brought to the Service in the last one year you came on board, have been significant and worthy of commendations.

“Particularly, I want to commend you on the reforms that have taken place in the Lagos Airport Command of the Service in the last three months. The Comptroller at that Command is doing a good job. I pass through the airport regularly; what I observed with the ways your officers and men carry out their duties in the recent time at the airport, deserve commendation from all of us” the monarch said.

The NIS boss during his speech at the Oniru palace told the paramount traditional ruler of the activities of the Service in Lagos State particularly in Eti-Osa and Ibeju Lekki axis of the state where a data processing centre of the Service is about to be commissioned.

Idris also informed the monarch of the Passport Office to be commissioned at Alimosho and the readiness of the Service to open more formations in the state provided there are availability of land for such.The Immigration boss who was on a two-day working visit to zone one of the Service was accompanied by top senior officers of the Service in the zone.

Nigerianflightdeck is an online news and magazine platform reporting business stories with a bias for aviation and travel. It is borne out of the intention to inform, educate as well as alter perceptions with balanced reportage.
Previous Aviation industry with 674 complaints ranks 3rd on FCCPC data in 2022
Next Dana Air introduces promo fares, bags special recognition award