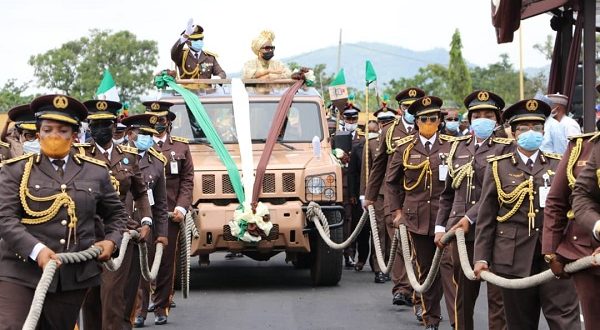 Pull Out ceremony of the 16th Comptroller General of Immigration, Muhammad Babandede MFR from the Service at the Parade Ground Service Headquarters along Musa Yar’adua Expressway, Sauka Village Abuja.

IN a colourful Pull-Out Parade, the management of Nigeria Immigration Service (NIS) has successfully pulled out the16th Comptroller General of Immigration, Muhammad Babandede MFR from the Service in a special occasion today after a meritorious sojourn.

The Pull Out ceremony, the first of its kind for a retiring Comptroller General of the Service was held at the Parade Ground Service Headquarters along Musa Yar’adua Expressway, Sauka Village Abuja.

Speaking at the event, CGI Babandede (rtd) said that he has made his contributions to the Service especially in emplacing some giant reform efforts that saw the Service winning some awards including that of the most reformed government agency in 2017 by the Presidential Enabling Business Environment Council (PEBEC).

He pioneered the Visa Reform Policy for the country as well as delivered the Migration Information and Data Analysis System (MIDAS) for effective border security. The NIS MIDAS architecture is linked with the INTERPOL Database for real time online border security and migration management activities. Under his watch the Service was able to upload over 150,000 stolen and lost travel documents for effective migration management.

The outgoing Comptroller General also ensured the conception and completion of the NIS Technology Building, a facility that has placed the Service at the centre of the global intelligence community. The Command and Control Centre in the Building, is equipped with modern border security and migration management infrastructure for effective and efficient intelligence gathering and sharing.

In his remarks, the Minister of Interior, Ogbeni Rauf Aregbesola commended the outgoing Comptroller General for developing the Nigeria Visa Policy a move that boosted Foreign Direct Investments and tourism in the country and implemented a Border Management Manual that has impacted positively on border security.

The Minister noted that the outgoing Comptroller General cooperated tremendously with the Ministry especially in adding values to any conversations on migration matters.
He described him as an intelligent Officer and a gentleman.

Nigerianflightdeck is an online news and magazine platform reporting business stories with a bias for aviation and travel. It is borne out of the intention to inform, educate as well as alter perceptions with balanced reportage.
Previous FG grants NiMet approval to commence academic activities in MIST
Next NCAA seeks  solutions to tackle dearth of safety, airworthiness inspectors as industry booms