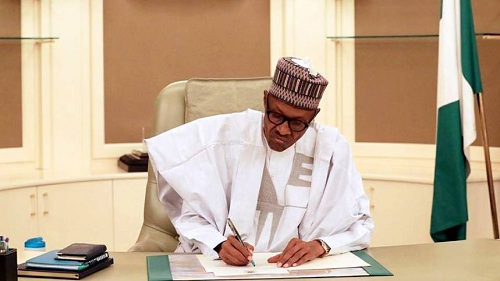 PRESIDENT Muhammed Buhari has said that the present administration aims to deliver on positive and enduring change through maintaining its National Security; restoring sustainable and inclusive Economic Growth and Development.

He made this known this morning as he delivered his 59th Independence Day Broadcast speech where he declared that Nigeria as a nation will not go back to food importation with a ricochet effect of exporting jobs in the nation.

In the broadcast monitored by Nigerianflightdeck, President Buhari said the present administration inherited a lopsided economy, where the Oil Sector comprised only 8% of Gross Domestic Product but contributed 70% of government revenue and 90% foreign exchange earnings over the years and decried the lack of investment in Non-Oil Sector.

He said,”This Administration inherited a skewed economy, where the Oil Sector comprised only 8% of Gross Domestic Product but contributed 70% of government revenue and 90% foreign exchange earnings over the years. Past periods of relatively high economic growth were driven by our reliance on Oil Sector revenues to finance our demand for imported goods and services.

“To address this imbalance, our commitment to achieving economic diversification has been at the heart of our economic strategies under the Economic Recovery and Growth Plan, which I launched on the 5th of April, 2017. This medium-term development plan charted the trajectory for our economy to exit from recession and return to the path of sustainable, diversified and inclusive growth for Nigerians.
“Pursuant to these reforms, the economy has recovered and we have had 9 successive quarters of growth since our exit from recession. The exchange rate in the last 3 years has remained stable, with robust reserves of US$42.5 billion, up from US$23 billion in October 2016.

According to the President, learning from the mistakes of the past, his administration is committed to responsibly managing our oil wealth endowments and prudently save oil income and invest more in the non-oil job-creating sectors.

“In this regard, we are significantly increasing investments in critical infrastructure. Last year, capital releases only commenced with the approval of the Budget in June 2018.

“However, as at 20th June this year, up to N1.74 trillion had been released for capital projects in the 2018 fiscal year. Implementation of the 2019 Capital Budget, which was only approved in June 2019, will be accelerated to ensure that critical priority projects are completed or substantially addressed,

“The Ministry of Finance, Budget and National Planning has been directed to release N600 billion for Capital Expenditure in the next 3 months. To maximise impact, we shall continue to increasingly welcome and encourage private capital for infrastructural development through Public Private Partnerships. Through the Road Infrastructure Tax Credit Scheme, which I initiated in January this year, we are giving incentives to private sector inflow of over N205 billion in 19 Nigerian roads and bridges of 794.4km across 11 States of the Federation.

As we push to diversify the economy, we still remain focused on optimizing the revenues generated from the oil and gas sector.

On food security, the president held that,” Our journey to food security and self-sufficiency is well underway. We have made remarkable progress in almost all segments of the agriculture value chain, from fertilizers to rice, to animal feed production.

“We shall sustain these policies to ensure additional investments are channeled, thereby creating more jobs in the sector. We must not go back to the days of importing food and thereby exporting jobs.”

Nigerianflightdeck is an online news and magazine platform reporting business stories with a bias for aviation and travel. It is borne out of the intention to inform, educate as well as alter perceptions with balanced reportage.
Previous Credit Access: Heritage Bank MD says Nigeria needs credible identity management
Next South Africa grants Air Peace approval to operate daily flights