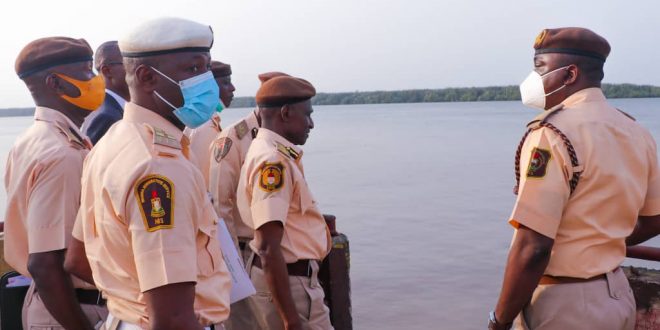 THE acting Comptroller General of Immigration Isah Jere Idris has said the nation’s Blue Borders will be improved further with the deployment of ICT solutions and has called for enhanced funding.

The acting Comptroller General stated this during a working visit to the Service’s Blue Border Formations in Oron and Ibaka areas of Akwa Ibom State where he maintained that the rising volume of migratory activities along the nation’s international waterways measuring over 853 kilometres requires that a closer attention is devoted to the sector for improved surveillance.

He noted that the waterways of Oron and Ibaka areas for instance, are accessible to countries such as Mali, Benin, Togo, Ghana and Cameroun among others and so concerted efforts should be made to equip all the agencies along that corridor for good security cover.

During the visit, the acting Comptroller General paid courtesy visits to the traditional institutions in the Border communities where he solicited for their cooperation especially in information sharing to ensure effective Border security.

At the palace of the paramount ruler of the Oron nation, His Royal Majesty Odiong Edet Akan, the acting Comptroller General stated that “We have come to realize that no security/military agency can achieve enduring peace and order anywhere in the country without the partnership of the traditional rulers and members of the local communities”.

Speaking earlier the paramount ruler of the Oron nation, stated that members of his communities have been and will continue to be very supportive to the Immigration Service and called for sustenance of the existing relationship.

The acting Comptroller General later proceeded to Ibaka Control Post where he inspected the operational areas and a Jetty under construction. He harped that when completed the Jetty will impact positively on operational activities at the Control and urged the Personnel to continue to demonstrate strong commitment to duty.

He thereafter paid a courtesy visit to the palace of the paramount rule of Mbo local government area, His Royal Majesty Ogwong Okon Asukwo Abang. The royal father assured of the support of his subjects to the Immigration Service and called on government to invest more on maritime security.

An interesting outcome of the visit to the Blue Border areas of Akwa Ibom State was the promise made by the acting Comptroller General that the two Control Posts of Oron and Ibaka would be included in the eBorder project of the Service shortly. When this is achieved the two locations would be connected to the Command and Control Centre at the Service Headquarters real time and online, for effective surveillance and monitoring of all movements and activities in the areas.

Nigerianflightdeck is an online news and magazine platform reporting business stories with a bias for aviation and travel. It is borne out of the intention to inform, educate as well as alter perceptions with balanced reportage.
Previous AON gives FG 21 days ultimatum for multiple designation policy reversal
Next UI Alumni Association celebrates Allen Onyema at 58