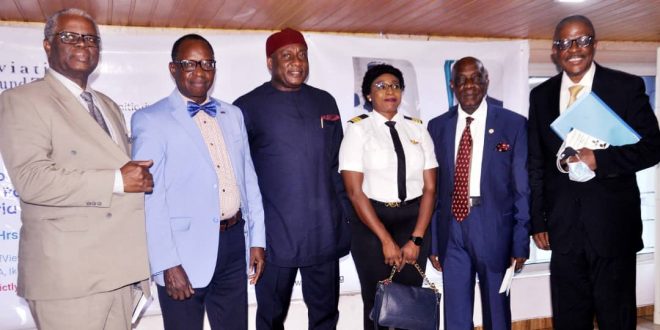 AIRLINE operators have blamed unfair competition with regards granting of Multiple Designations and Multiple Frequencies as the reasons for the collapse of over 50 indigenous airlines in the past.

This is just as the airlines under the aegis of Airline Operators of Nigeria ( AON) disagreed with the position of the Minister of Aviation, Hadi Sirika, over the Federal Government’s policy leaning to grant foreign airlines multiple entry into the country giving FG a 21- day ultimatum and threatening court action.

The chief executive officer of Air Peace and vice-president of the Airline Operators of Nigeria (AON), Allen Onyema, representing the association at the 1st Quarter Aviation Safety Round Table Initiative (ASRTI) Business Breakfast Meeting held in Lagos on March 31, described the multiple entry idea queried how government intended to encourage its national airline when foreign airlines are allowed to conduct domestic operations in the name of international operations in the country.

“If you take off from New York and move to Atlanta, they would probably ground that plane there. Wherever you want to go in the United States, you are not allowed to fly in your private jet again as a foreigner. They make you use their own indigenous airlines. When you are leaving, you go the way you came – and this is a private charter – not to mention commercial aviation.

AON representative continued,
“You allow Qatar Air land in Kano, from Kano they go to Port Harcourt, from Port Harcourt to Abuja and then Abuja back to their country. AON is not ready to wait another one month for this thing to be rescinded; that is the thrust of this paper I am holding. Not Allen Onyema but AON. This must be rescinded. This is another kind of colonisation.”

The airlines concluded that giving foreign airlines rights to fly into several locations in Nigeria hurt the revenue of domestic airlines, who they asserted would suffer undue competition from their foreign counterparts.

On the plan to go to court, he said, “The President has to hear that all he has done for us will be destroyed with multiple destinations given to foreign airlines in this country. He should know it and I am sure that the Minister would see reasons to make amends.

“They know they are fooling us and what we are doing here wont be allowed in our own country. The earlier they stop the better or else we would go to court, that is what AON has stated.

“But because we believe in our Minister, we are going to present this to him. We believe the Minister would stop this in the next 21 days. It is not an ultimatum but we believe because of his interest in raising the bars in aviation. It is not Qatar, we have Ethiopia, Emirates and Turkish and others.

“Tell me with the airlines ravaging Nigeria, what is left for the local airlines to take. Air Peace are planning to go to India, we just needed landing permit. They refused to give us Mumbai. They are protecting their country. The airlines in Nigeria are trying”

Nigerianflightdeck is an online news and magazine platform reporting business stories with a bias for aviation and travel. It is borne out of the intention to inform, educate as well as alter perceptions with balanced reportage.
Previous Heirs Insurance promises women 24-hour road rescue at Her Motor Plan launch
Next Nigeria Immigration makes case for technology driven Blue border surveillance