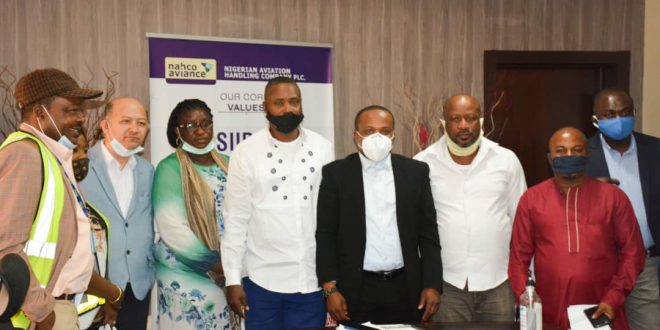 A cross section of participants at the quarterly meeting with exporters, airlines and representatives of Nigerian Export Promotion Council (NEPC) at NAHCO headquarters in the Murtala Muhammed Airport (MMA), Lagos

NIGERIAN Aviation Handling Company (NAH​ CO) Plc has vowed to consistently improve the experience of its clients by rendering quality and standard services to them always.

The company, which controls over 80 per cent of foreign airlines cargo handling is also the only ground handling company certified by Quarantine, a department under the Ministry of Agriculture to export agricultural produce out of the country.

Speaking at a quarterly meeting with exporters, airlines and the representatives of Nigerian Export Promotion Council (NEPC) at its headquarters in the Murtala Muhammed Airport (MMA), Lagos on Tuesday, Group Executive Director, Business Development and Commercial, NAHCO, Prince Saheed Lasisi, observed that the management has over the years maintained a topnotch services to its clients and assured that the company would continue to render this no matter some imbalances noticed in the system.

Lasisi explained that the management would also continue to provide enabling environments for clients to grow, while also working seamlessly with government and its agencies for the betterment of all parties and the nation’s economy.

He said: “NAHCO is known for due process in handling of its cargo and no matter the pressure, we will not compromise our standards. We don’t want to lose our certifications and at the same time, we want to keep our clients including the airlines and exporters.

“One thing is clear, 80 per cent of the foreign airlines are NAHCO clients. Traditionally, those exports will still come to NAHCO and all the certifications that we are supposed to have, we have them all. For us to export cargo to European Union, United Kingdom and the United States, we have the certifications and recently, we got certification from Quarantine Department in the Ministry of Agriculture for all agricultural exports to pass through us.

“Towards the tail end of last year, we had a meeting with the EU and British Exporters, they dialogued with us and deliberated on how we can render to them efficient services. Left to us at NAHCO, everything is intact. We normally intervene in talking to the government agencies to extend the working hours so that the cargo can depart as at when due.”

Also speaking at the event, Regional Cargo Manager, Turkish Airlines, Sevket Battal, said that the carrier was willing to give incentives to exporters on tonnage of cargo exported through it.

He decried that the freight rate from Africa was low when compared to other continents, but said despite this, Turkish Airlines would help the exporters to grow.

Battal further suggested to the exporters to consolidate their operations in order to attract more incentives.

“Once we have high volumes of cargo coming from Nigeria, we can easily plan and encourage exporters through incentives instead of last minute surprise. Once we have plans, we can give competitive rates to our clients. Our intent is to make the customers happy and this is a win-win business for all, we take our size and also the clients too, take their size,” he said.

On its relationship with NAHCO, Battal noted that the airline had been with the ground handling company since 2006 and commended it for consistently providing quality services to all its clients, stressing that the company had improved on its export warehouse by digitalising it, thereby making cargo export seamless and less strenuous.

Representative of NEPC, Mrs. Francisca Odega, called on airport authorities to work with all business organisations in the industry in order to grow the nation’s economy.

She emphasised that for Nigeria to be viable, it needed to focus more on exportation, rather than import, decrying that Nigeria is focused more towards importation.

To encourage more exportation, she opined that there should be reduction in freight charges, improvement on the Ease-of-Doing- Business and sought for more cooperation among major players in the system.

Nigerianflightdeck is an online news and magazine platform reporting business stories with a bias for aviation and travel. It is borne out of the intention to inform, educate as well as alter perceptions with balanced reportage.
Previous IATA predicts $84 billion in losses for airlines this year, emphasizes need to avoid quarantine
Next FGN to tackle capital flight with arrival of B737-NG Full Flight Simulator