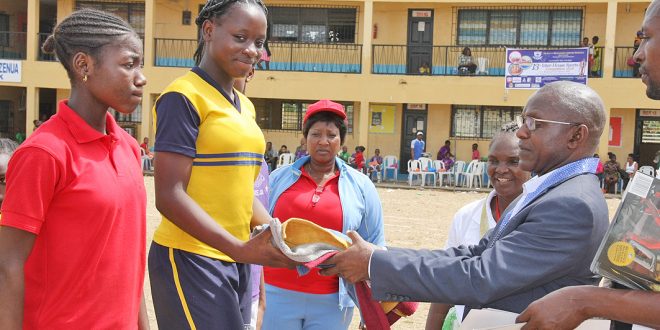 CHILDREN of all houses at the Murtala Muhammed Airport (MMA) School gathered on Wednesday and treated parents, teachers and the entire airport community to a thrill as they held their 13th annual Inter- House Sports.

It was fun galore as the kids from Blue, Green, Red, Pink, Purple tried to outdo themselves in healthy competition at the one day event filled with prizes for winners.

Principal of Murtala Muhammed Airport (MMA), Lagos, Mrs. Stella Otoide who spoke to newsmen at the event stated that Inter –House Sports will help to bring out the skills in students and called on government to fund education effectively and encourage children.

Mrs Otoide said the school organised Inter –House Sport because it believes it is part of the development of a total child and called on government to encourage the kids to display their skills.

She stated that apart from annual Inter-House Sports, the school also engage in weekly physical and health educational activities like table tennis, swimming and football among others.

On whether the organising the Inter House Sports has brought out the best in the students, she said, “I would say this has done a lot in the lives of our children. Presently, we have a child who was not academically up there, but he was the best in all the sports he participated in, in this school. The sport has specifically brought him out and he’s today in a West African country and he’s been performing fantastically well.

To buttress her point, she cited a boy who she said was the best sports person last time, adding that she is today in a university in Togo and that he’s also doing his sporting activities.

Asked to advice the Nigerian government on how to enhance sporting activities within the schools, she said, “My advice to the Nigerian government is that they should try to fund education effectively and encourage children. They should encourage them to display their skills. When education is funded and the curriculum is managed by the professionals because even in the curriculum, there is an aspect that is called co-curricular activities and sports is part of that.”

She continued, “If it is funded and we have facilities in schools, the thing can actually evolve on its own. We have children develop in sporting activities in this country but can’t meet up with their counterparts outside the country because the facilities in most times are not there in schools.”

She called on the government to do something about Inter-School Sporting Competition, adding that though, the government has tried in its own way, by building stadiums all over the state with Channels Cup and others, but that government should fund education and train the stakeholders and make provision available.

Nigerianflightdeck is an online news and magazine platform reporting business stories with a bias for aviation and travel. It is borne out of the intention to inform, educate as well as alter perceptions with balanced reportage.
Previous Coalition commends Minister on exploits in Aviation says present govt has changed business dynamics
Next Ethiopian Airlines becomes first to acquire A350 XWB Simulator Operator in Africa