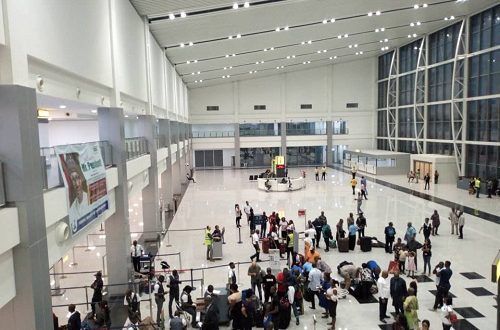 General Manager, Corporate Affairs FAAN, Mrs. Henrietta Yakubu who explained the status of the remaining terminals in an interview with aviation journalists said the delay in the new MMIA was due to the issue of citing the terminal location among other factors

Mrs. Yakubu explained, “Lagos airport did not take off early because of the issue of citing of the new terminal. Where we have it now, is not the original site, it has come up with a lot of issues – connectivity to the airside and the runway and others, but we are assuring our passengers that once Kano is commissioned, the next airport would be Lagos.”

In that vein, Emirates would increase its four weekly flights to daily to Dubai Airport from NAIA from June 1 while Turkish Airlines would commence direct flight from its base to PHIA from June 25 and Nigerian carrier, Air Peace would also begin direct flight to Dubai from PHIA as from April this year.

On the decongestion of Lagos airport, she explained that FAAN had encouraged airlines to divert some of their traffic to airports outside Lagos especially to the newly constructed terminals as the diversion of traffic from Lagos make use of the new state of the art terminals as it would help in putting them to maximum use.

She explained that it was necessary to divert traffic from Lagos to other airports within the country, but noted that Lagos would remain the hub of airports in Nigeria but rather than all airlines focus their attention on Lagos Airport, they could also make use of the state-of-the-art facilities in other aerodromes across the country, stressing that FAAN was determined to improve flying experience of air travellers within Nigeria.

Apart from the foreign airlines, she emphasised that Air Peace would also commence direct flight operations to Accra from Abuja, while scheduled flights between Port Harcourt and Dubai operations of the airline would commence in April this year.

Besides, Yakubu explained that Air Cote d’Ivoire would commence direct flight from Abuja to its base in Abidjan soon.

She said: “Turkish Air and Emirates would soon commence direct flight to their bases from the new Port Harcourt International Airport terminal. We want to appeal to members of the public that they don’t have to come from Port Harcourt or any part of the Eastern state to fly out of the country.

“They can easily go to Port Harcourt to fly. Also, as you know, Abuja Airport new terminal too has opened and Emirates would be starting from the terminal from June. We are expecting all the international airlines to start operating also from Abuja Airport.

“We want to encourage our passengers that they don’t all have to come to Lagos even though we know Lagos is the commercial nerve centre of the country and the airport is the hub, but passengers can travel from Abuja and Port Harcourt airports to connect to their destinations so that we can decongest Lagos airport. Turkish will soon commence a direct flight from Port Harcourt to Turkey, while Emirates will also do so to Dubai.”

Nigerianflightdeck is an online news and magazine platform reporting business stories with a bias for aviation and travel. It is borne out of the intention to inform, educate as well as alter perceptions with balanced reportage.
Previous Crashed NCAT aircraft riddled with bullets, burnt by bandits
Next SAHCO, ABX World partner on agro export promotion