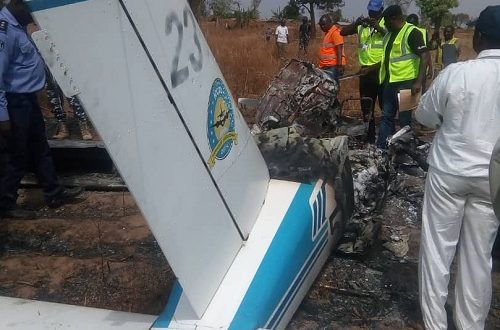 INVESTIGATION into the crashed Nigerian College of Aviation Technology (NCAT) TB-9 Tampico aircraft may have become difficult with information that armed bandits operating in North-West axis have set the aircraft on fire after riddling its hull with bullets.

Nigerianflightdeck learnt that after the plane crashed and the pilot evacuated some armed bandits rushed to the scene rained bullets on the aircraft and set it on fire thinking that it was one of the jets in the fleet of the Nigerian Airforce (NAF) that had been bombarding their camps since the beginning of the year.

Already NAF personnel, the Inspector General of Police and management of the school have been to the scene yesterday afternoon, but no official statement has been released on the situation as at yet.

NCAT aircraft on March 1, 2019 lost one of its  TB-9 Tampico aircraft after a forced landing by the pilot at about 14:40 due an engine failure.

No lives were lost as both occupants of the aircraft came out unscathed by the incident and have since returned the base.

Nigerianflightdeck learnt that the Tampico (TB9) aircraft with Nationality and Registration marks 5N-CBP was on a test flight being conducted by a Pilot and an Engineer.

The pilot made a successful forced-landing about 7 nautical miles North-West of Kaduna  at Rumi forest, Sabon Birni,Birnin Gwari LGA, Kaduna State.The Accident Investigation Bureau (AIB) has been notified, in line with standard practice.

Nigerianflightdeck is an online news and magazine platform reporting business stories with a bias for aviation and travel. It is borne out of the intention to inform, educate as well as alter perceptions with balanced reportage.
Previous Update: NCAT loses TB9 aircraft to engine failure after forced landing in Kaduna
Next MAKIA to become operational in 2 months as FAAN explains delay in new MMIA terminal