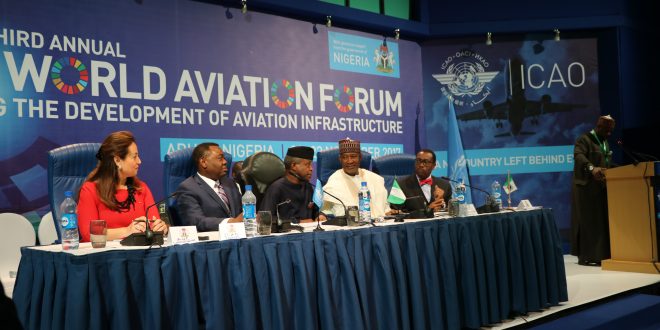 PRESIDENT Muhammadu Buhari has stated that the key to achieving aviation development is through collaboration and has called for a financial arrangement that would aid infrastructure growth in the midst of glaring deficit.

He made this known this morning while declaring open the ICAO World Aviation Forum (2017) in Abuja.

The president who was represented by Vice President Yemi Osinbajo explained that already there are financial partnerships with the African Development Bank (AfDB) that is currently yielding fruit developmentally but called for more to aid the weaker countries in the ‘No country left behind’ initiative.

Also speaking, Minister of State Aviation, Hadi Sirika who spoke earlier stated that according to the Nigeria Integrated Infrastructure Masterplan(NIMP), US$ 775bn is required to develop Nigeria’s transportation infrastructure over the next 30years.

He however stated that with the kind of deficit shown it looks bad but
provides an opportunity for investments.

” it is imperative that in this address I apprise you with the excellent business opportunities in the aviation sector of this wonderful country…I strongly believe that Nigeria is the place to put your money not only because we moved 24 places on the ease of doing business recently but more so the Rate of Return on investment is 34%, one of the highest in the world.”

” Ladies and gentlemen, the Nigerian government together with relevant stakeholders, developed a roadmap that include but is not limited to safety and security infrastructure strengthening, concessioning of airports beginning with the big four international airports, establishment of a national carrier(private sector led), establishment of maintenance Repair Organisation (MRO ) centre, aviation leasing company, development of Argo-cargo terminals and associated infrastructure among other things.”

Nigerianflightdeck is an online news and magazine platform reporting business stories with a bias for aviation and travel. It is borne out of the intention to inform, educate as well as alter perceptions with balanced reportage.
Previous Bankole, Medview boss, floors ART on 20 aircraft minimum requirement
Next AfDB links infrastructure deficit, high taxes to high cost of air travel in Africa