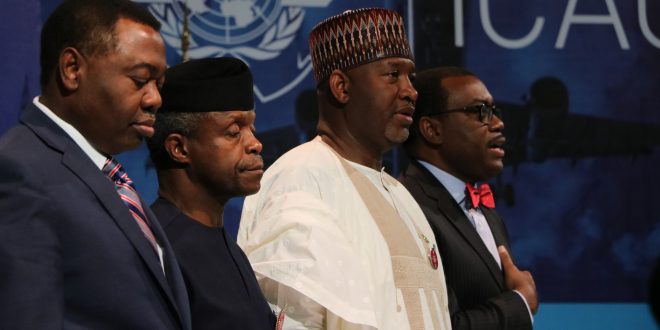 PRESIDENT of the African Development Bank (AfDB), Dr. Akinwunmi Adesina has decried the poor state of aviation infrastructure in Africa, and said air travel can be better sustained if the taxes would allow travel fares to reduce and enable more people travel.

Dr. Adesina who congratulated the country for various feats especially for the hosting of the ICAO World Aviation Forum (IWAF) described it as a clear mark of confidence in the government of Nigeria.

He however decried that the cost of air travel in Africa is exorbitantly high hinging it on the high taxes and fees charged by African airlines stating that despite the call for the open skies agreements full implementation that the fares will tax travellers out of the air.

He stated that air travel was recording growth and projecting even more growth but that on the flip side, the cost of air travel in Africa remains exorbitantly high.

He said,”The cost of aid travel is 200% more than costs in the European Union and 250% higher than in India for similar distances. ”

“A big part of this is the very high taxes, fees, and levies that are charged in Africa. For example, it costs $128 to fly between London and Rome, but $597 to fly between Abidjan and Niamey, a shorter distance. And just to go from Johannesburg in South Africa, to next door neighbor Lilongwe in Malawi, the cost is $406. ”

“Again, a much shorter distance than from London to Rome. If you require another example of this serious imbalance, consider for a moment that taxes paid for a Lagos to Kinshasa ticket amounts to $397 which is 300% higher than the total air travel costs between London and Rome. And that’s just the taxes alone!”

“You can begin to understand why this is a challenge and a burden for the passenger, for businesses, and ultimately the growth and development of the aviation sector! ”

“Aircraft departure fees alone in Africa are 30% above the global average, while taxes, fees and charges are 8% higher. Given lower per capita incomes in Africa, high fares essentially tax the poor out of the air! We may have an open sky policy, but then end up with empty skies!”

He also declared that Africa needs safe skies and that the numbers were not looking good.

“Africa is the riskiest of skies to fly in. While Africa accounts for only 3.4% of all flight departures, it represents over 9% of all air accidents and 37% of total global air fatalities. Among the 200 airlines blacklisted by the EU, more than 50% are African! These are shocking and non-acceptable numbers. ”

“These must change! Air travel must be safe – and safety should never be compromised!”

“Modern and cheaper technologies such as the satellite based air navigation services now preclude the need for ground infrastructure, and make it possible to serve remote areas with radars. We must also develop within Africa, aircraft maintenance services and strengthen regional and sub-regional aviation safety agencies. ”

“We look towards working with other partners on establishing facilities to de-risk financing for aircraft acquisition, upgrading of airports, expansion of regional navigational and air safety, and deregulation of the aviation industry to be more competitive and efficient.”

Airport development fees inAfrica is 30% above that of Europe due to high taxes and these taxes wil tax people out of the air. We may have open skies but we may be taxed out of the skies.”

” I find it very shocking that old and poorly maintained airports, weak inspection and oversight as well as non compliance to safety oversight, air transport must be safe and safety must not be compromised. We must develop aircraft maintenance services because of what use are nice looking airports with state of the art navigational aids without any jets taking off or landing there.”

Nigerianflightdeck is an online news and magazine platform reporting business stories with a bias for aviation and travel. It is borne out of the intention to inform, educate as well as alter perceptions with balanced reportage.
Previous IWAF: President Buhari calls for collaboration to grow infrastructure in Africa
Next Dana Air resumes flights apologizes for unions’ disruption