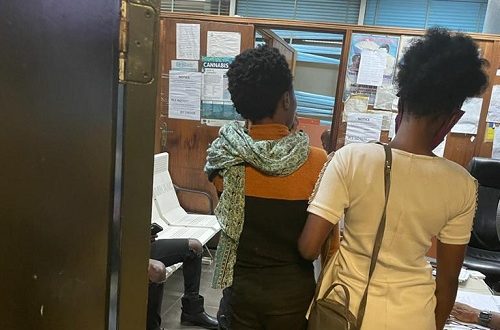 For decency, NigerianFLIGHTDECK has chosen to use a picture to save the identity of the family. The returnee with her sister at the NIS Lagos Airport Command office

NIGERIA immigration Service (NIS), Murtala Muhammed International Airport (MMIA), Lagos Command on Wednesday reunited one Adepoju Oluwatoyin Ruth, who arrived the country from Muscat in Oman with her family at the airport.

This is coming barely a month after the NIS MMIA, Lagos Command handed over a mentally unbalanced Nigerian male deportee, Mr. Osagie Favour to his family. READ ALSO: NIS hands over disturbed deportee to father; parent urges other govt agencies to emulate service

Ruth who arrived the country from Oman aboard Egypt Air on Tuesday, June 8, 2021 is suspected to have special needs and information gathered indicated that the returnee’s name was erroneously given as Olajide Oluwatoyin Ruth by the Egypt Air, which could not be traced in the immigration system.

The command however went the extra mile to sort out her real names from its system and was able to contact the father who was said to be a residence of the Federal Capital Territory (FCT), Abuja.

The father in turn it was gathered directed the sister of the returnee,  Adepoju Olamide who is based in Ibadan, the Oyo State Capital to pick her up at the airport.

On arrival at the airport, the Command interrogated the sister, Olamide to proof her true identity, but it was learnt that the returnee immediately went berserk and incoherent with her communication.

It took the ingenuity of the officers of the command to calm her down and obtain necessary information from her.

A source explained to NigerianFLIGHTDECK that the Comptroller, MMIA Command, Mr. Abdullahi Dalhatu, ordered that the returnee be kept in the custody of Immigration for another 24 hours to calm her and for better observation.

Further search into the details of the returnee indicated that she left Nigeria for Oman in 2019 and was engaged as a house maid in that country.

The source close to the scene confided in our correspondent that: “The lady who is in her 20s was brought into Nigeria by Egypt Air and handed over to NIS officials at the airport.

“But, the command went the extra miles to get the details of the girl and was able to connect with her father who we gather resides in Abuja. To cut the story short, the sister came on Wednesday evening to reunite with the returnee.”

The sister to the returnee, Olamide, expressed delight at reuniting with Oluwatoyin again and confirmed that she left Nigeria in 2019 in search of greener pastures.

She also commended the immigration officials at the airport for handling the issue with utmost professionalism, saying that her respect for the service, especially the command had increased.

When contacted, Dalhatu was reluctant to talk on the development, rather, referred our correspondent to the headquarters of the service in Abuja for more details.

He, however, advised Nigerians to be mindful of how they travel in search of ”greener pastures” in order not to fall victim.

Nigerianflightdeck is an online news and magazine platform reporting business stories with a bias for aviation and travel. It is borne out of the intention to inform, educate as well as alter perceptions with balanced reportage.
Previous Route Expansion: Air Peace connects PH-Benin, Kano-PH; restores Kano-Asaba
Next iPADIS sign MoU with ALICANTO on aviation, aerospace development ; education