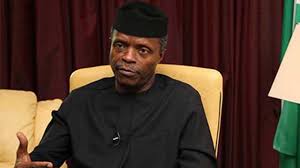 NIGERIA’S Vice President, Professor Yemi Osinbajo has said that despite high  prices of oil, value was not being added to the Nigerian economy as the productive sector is being stunted a result of  few jobs  being created and more people were going into poverty.

This is just as he said that despite the low contribution of about 7%-8% of the oil sector to the Gross Domestic Product (GDP) of Nigeria, oil revenue controls the non-oil revenues which contributes a higher 53% to the nation’s GDP.

The Vice President who spoke at the UNILAG Convocation Lecture where he explained the Next Level mantra, however said government is prioritizing six key areas of infrastructure building, productivity, education, healthcare, and a social investment program that would realign the economy to make it more productive .

He explained the reason why despite many saw the nation as economically stable, the reverse was the case.

Osinbajo said, “Those who benefits when there is high oil revenue but no productivity essentially in the service sector and of course contractors and persons who can find themselves in any of the rent seeking opportunities presented by high oil prices, very few other people can profit.

“So the rich in that situation are persons who have the advantage of knowing people in government, who can get contract of course from government who are the biggest suppliers of contracts and all the opportunities and that is why at a point in time, somebody commented that we are doing very well as an economy because on one occasion 35 people flew in jets to Kenya for a particular event.

“The productive sector, the real manufacturers, the value adding businesses have always been relatively few. The source of the income to these individuals, and I refer now not to the manufacturing but the contractor, is from oil revenues. When oil revenue falls not only does GDP growth falls, but these most affluent but unproductive sector suffer.

On the government’s plan to rejig the economy and make it work, Professor Osinbajo said, “We needed to develop a business plan that would one: prioritize the building of infrastructure especially rail, road, power and ports 2: productivity has to be a guiding principle as we diversify the economy, from oil and gas, 3: the fight against corruption especially public sector corruption, 4: developing new education curriculum, that emphasizes science, art, technology, maths and also emphasizing some of those critical skills needed for the jobs of the 21st century 5: a new approach to resourcing healthcare,6: a social investment program that deals with issues of extreme poverty and unemployment. The economic recovery and growth plan addressed many of these issues that I have mentioned.

Nigerianflightdeck is an online news and magazine platform reporting business stories with a bias for aviation and travel. It is borne out of the intention to inform, educate as well as alter perceptions with balanced reportage.
Previous FG should support Air Peace with flag carrier status-Governor Obiano
Next NCAA CPD deploys passenger electronic information platforms around Nigerian airports