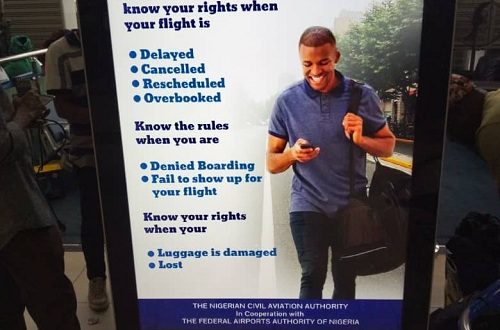 NO fewer than 30 electronic information platforms have been deployed to airports around the nation to ensure continuous enlightenment of air travellers about their rights and their responsibilities.

Nigerianflightdeck learnt that this was done through efforts of the Consumer Protection Department (CPD) of the Nigeria Civil Aviation Authority ( NCAA)  to help reduce to the minimum, incidents of fracas around the nation’s airports.

According to information gathered, full deployment of these electronic information platform is already underway as Lagos, Abuja, Port Harcourt, Kano, Kaduna, Jos, Yola have been covered along with Enugu, Uyo,Owerri.

At the MMIA, of the five deployed there, one each is situated at Departure ‘D’ and ‘E’ while Arrival ‘D’ and ‘E’  and another at the NCAA help desk at the international airport.

The passenger right platform scrolls information on what a passenger should do in the event of delays, cancellations, rescheduled flights, overbooked flights as well as failure to show for flights.

The platform also shows consequences for ground rage like it happens after there has been a delay or cancellation as well as air rage.

Nigerianflightdeck spoke to Director of Consumer Protection, Alhaji Adamu Abdullahi who explained that it was part of plans to intimate passengers of their rights and their responsibilities so they understand what they can do and how to seek redress on myriad situations.

Adamu told our correspondent that the platforms will be linked as all of them are networked under a control centre. He said there will fe under a management consultancy  as the control centre will decide what goes on the platform.

He also said the platform would generate some adverts one minute after a 60-minute run, and the returns from the advert would be used to train industry workers  who deal with passengers all day, everyday.

On the training he said,” Essentially, the training is to address the incessant compliant D from passengers especially on discourteous service by frontline staff of airlines, concessionaire’s, baggage handlers, customs, immigration, FAAN and other agencies that operate in the airport environment.”

Nigerianflightdeck is an online news and magazine platform reporting business stories with a bias for aviation and travel. It is borne out of the intention to inform, educate as well as alter perceptions with balanced reportage.
Previous How high oil prices shackled Nigeria’s productive sector- Osinbajo
Next Ifeyinwa Ugochukwu assumes office as CEO, Tony Elumelu Foundation on April 1