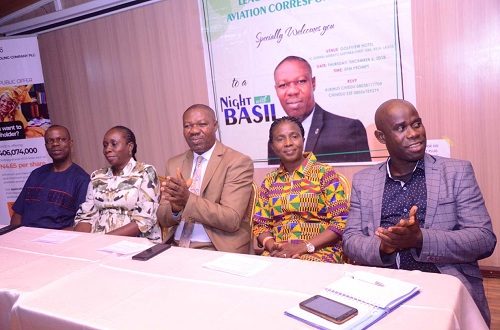 GROUND HANDLING companies in Nigeria need government to grant them waivers on importation of equipment to reduce their operation cost, according to Chief Executive Officer of SAHCO, Mr. Basil Agboarumi.

This is just as he charged ground handling organisations to ensure maximum cooperation in order to charge the right prices on services rendered airlines.

These calls were made over the weekend in Lagos by Mr. Basil Agboarumi in his speech during the ‘A Night With Basil, organised by the League of Airport and Aviation Correspondents (LAAC) to honour him as the first Public Relations Manager to be elevated as a substantive Chief Executive Officer (CEO) of a major aviation company in Nigeria.

Agboarumi said government needed to grant the ground handling companies waivers on importation of equipment for operation, noting that if such regime could be granted the airlines, it was also pertinent for handlers to be given same privilege.

Lamenting that ground handlers are not adequate paid for the services rendered airlines, he insisted that the ground handling companies cannot operate in isolation of the entire industry and called on the Federal Government to intervene in the charges paid by the airlines.
“This is the time I think we need cooperation in the industry. The ground handlers need to come together because we can’t be isolated from what is happening in the sector. what happens to an aspect of the industry, affects all since the general duty of us in our various segments of the industry is to see how passengers or goods can move from one point to the other.

Agboarumi further lauded the leadership of LAAC for putting the event together for him, stressing that contribution of journalists to the development of the sector could not be over-emphasised.

Present at the gathering were Mr. Sam Adurogboye and Mrs. Henrietta Yakubu, the General Manager Public Affairs of the Nigerian Civil Aviation Authority and General Manager, Corporate Communications of the Federal Airports Authority of Nigeria (FAAN), respectively, among several other players in the sector and beyond.

Nigerianflightdeck is an online news and magazine platform reporting business stories with a bias for aviation and travel. It is borne out of the intention to inform, educate as well as alter perceptions with balanced reportage.
Previous N808 million airport debt: FAAN stays action on security, fire service withdrawal
Next FAAN assures of solvency as it engages banks, contractors on opportunities