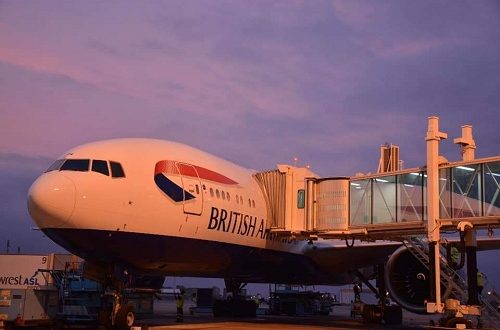 IN the aftermath of leaving Nigerian passengers in Accra, leading to untold hardships, British Airways has come out with an explanation stating that some of their 157 Nigerian passengers chose to make personal arrangements for their return to Lagos.

This is just as the carrier has called on aggrieved passengers to send receipts of expenses incurred during the diversion period to its customer relations team on standby to process the reimbursements .

It was widely reported that foreign airlines including British Airways and Delta Airlines had diverted their flights to Ghana and Senegal over poor visibility in Lagos and many of them claimed to have been abandoned by these airlines in those countries.

A British Airways passenger on its diverted flight, had said the passengers were asked to find their way to Lagos.

According to him, the flight which was supposed to land in Lagos last week Tuesday was diverted to Accra and the passengers spent another two days before returning to Lagos on Friday night, on their own.

He said some of the affected passengers had to return to Nigeria by road as the airline offered them an option of returning to London.

British Airways in an issued statement today signed by its General Manager, West Africa, Kola Olayinka said that it had chartered a Boeing 767 to return the passengers to Lagos from Accra but “a number of passengers had opted to make personal arrangements for their return.”

The explanatory apology by the airline read,”We would like to use this opportunity to tender an unreserved apology to our esteemed customers for the inconveniences of varying degrees, experienced these past few days. The situation has been a result of recent delays and diversions of flights occasioned by the inclement weather causing very poor visibility at the Lagos Airport, coupled with a number of factors outside of our immediate control.

“In these unique cases, the decision to delay or divert flights were made carefully by our pilots who are well trained to handle situations like this, especially in consideration of the safety and security of our passengers and crew.

“As a people-first airline, we ensured that our customers were properly accommodated in hotels where adequate rooms were available, meals, refreshments, and transport to and from the Airports were provided for their movement at the different Airports in Accra, Abuja, and Lagos.

“Regrettably, in this unique case, most hotels were taken up by passengers of airlines that were earlier diverted to Abuja. The direct result was the inadequacy of accommodation. To resolve this, we booked all 157 available rooms and accommodated 157 Passengers, we also ensured the safety of the remaining passengers by accommodating them in a dedicated area provided by Sheraton where we provided meals and drinks.

“The Accra incident was markedly unpredictable as the delay lingered for two days due to the persisting weather condition. We chartered a Boeing 767 from Euro Atlantic to convey passengers from Accra to Lagos however a number of passengers had opted to make personal arrangements for their return.

“We regret the frustrations experienced and the disruptions it would have had on earlier-planned engagements of our esteemed customers. We would also like to use this opportunity to encourage passengers to send receipts of expenses incurred during this period to our customer relations team on standby to process the reimbursements and also attend to queries,” it read.

Nigerianflightdeck is an online news and magazine platform reporting business stories with a bias for aviation and travel. It is borne out of the intention to inform, educate as well as alter perceptions with balanced reportage.
Previous NCAT takes delivery of six Diamond DA40 NG training aircraft
Next NiMET set to install Doppler Weather Radar in Lagos, Kano Airports