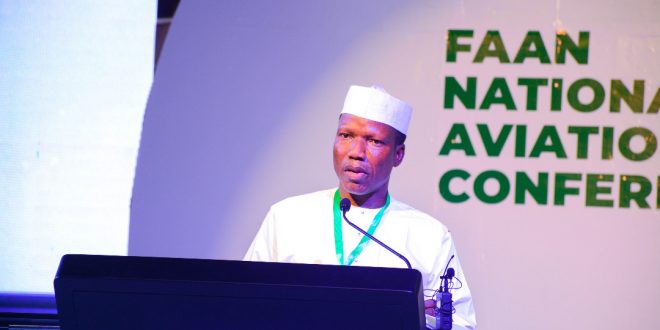 MANAGING Director, Federal Airport Authority of Nigeria ( FAAN), Capt. Rabiu Yadudu has said that due to safety and security considerations, it has met with sister agency; Nigerian Airspace Management Agency (NAMA) and both have resolved to adopt the new operating standards policy by stopping flight operation extension to sunrise and sunset airports across the country

Yadudu made this known on Wednesday while presenting his paper at the ongoing Airports, Airlines Business Summit and Expo AABSE 2022 organized by NIGAV with theme of the summit: ‘Fixing the Broken Link’ stressing that approvals are available for necessary cases but that airlines must now work within their confines as no approvals for extension will be granted willy-nilly.

This move, according to Yadudu is a safety move and may in time check airlines who have a Standard Operating Procedure of delaying their flights but he however insisted that the policy FAAN has tinkered is not absolute and would make concessions for extreme situations.

“We have stopped giving operation extension to sunrise and sunset airports across the country. It was actually the safety and security considerations that drove us to make this particular decision. We have already started and we’ve met with NAMA team and we are in agreement that there is no going back.”

On exigencies that could force airlines to operate to sunrise and sunset airports beyond the scheduled period, he said:

“We don’t plan safety and security policy based on such permutations.When something like that happens, then we know how to cross the bridge when we get there; but right now we are working normally and operations are normal, we have to plan our operations the way they remain standard. If you consider such things then you will not have standard operations procedure (SOP) anywhere. It remains as it is.”

Nigerianflightdeck is an online news and magazine platform reporting business stories with a bias for aviation and travel. It is borne out of the intention to inform, educate as well as alter perceptions with balanced reportage.
Previous MMA records 70% of 93 bird strikes from January-June in Nigeria
Next AABSE 2022: NCAA canvasses technology use to advance passenger experience