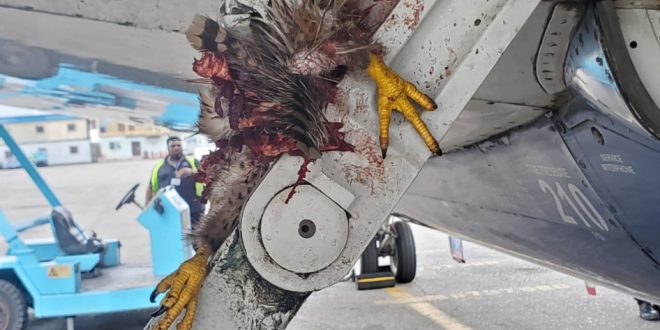 A bird caught in the landing gear strut of an aircraft

STATISTICS indicate that there have been 93 Bird Aircraft Hazard Strikes ( BASH) otherwise known as bird strike incidents across airports in Nigerian in the first half of 2022 of which 54 of such incidents happened at the Murtala Muhammed Airport (MMA), Lagos alone.

Head Bird/Wildlife Hazard Control, Nigerian Civil Aviation Authority (NCAA), Mr. Azike Edozie made this known while speaking at a workshop organised by the Search and Rescue Mission of the Nigerian Airspace Management Agency (NAMA) on Wednesday in Lagos, stressing that the number accounts 70% of incidents in the country.

He sought for a lasting solution to the recurring incident be and growing statistics soon, decrying that airlines were losing million of dollars to the incident annually.

He said: ”My record shows that we have had at least 93 bird strike incidents in all our airports between January this year to June. And out of this number, 54 of it happened in Lagos Airport alone, which represents about 70 per cent of the total occurrences.

”We all have to proffer a solution to this menace and I do hope we have a lasting solution to it because everyone, especially the airlines are losing money.”

Head of Unit, Bird Control, FAAN, Murtala Muhammed International Airport (MMIA), Lagos, Mr. Adetunji Adetutu in his presentation explained that FAAN was doing its best to curb the increase of the incident through the procurement of modern equipment, which he said had gone a long way to reduce its impacts.

He said that 98 per cent of bird strike incidents occurred at the airports, especially when taking off and landing.

He however said some of the pilots by neglecting and violating the advise of Air Traffic Controllers (ATC) because there were usually in a hurry to depart an airport for another, also were part of the problem and called for an attitudinal change to safety critical advise from ATCs

He said: ”The final say on what happens to the aircraft lies with the pilots. Until the ATC gives clearance for pilots to depart or land, it is necessary for pilots to listen to their advice.

”Airline operators should have a change of culture on how we carry out our duties. It’s the suitability of the environment that bring birds to the airport environment. We have water, shelter and food around the airports. Runway should be free of activities at take off and landing.”

He emphased further that most of the birds that cause havoc at the airports migrate from other continents to Africa at a particular time of the season.

Iwalaye, observed that FAAN had in recent times improved with the procured of equipment to reduce the incident.

‘We need to find a way to address this challenge. Birds are in their natural habitant and most of our airports are built close to the forest.

‘Apart from birds, we also have wildlife animals, which are also strikes. We hope to propose on mitigation in order to address it. We also need to know the activities of birds too.

Nigerianflightdeck is an online news and magazine platform reporting business stories with a bias for aviation and travel. It is borne out of the intention to inform, educate as well as alter perceptions with balanced reportage.
Previous Capacity building: NIS, Konrad Adenauer Stiftung partners to train Public Relations Officers
Next FAAN halts extension to operate into sunrise, sunset airports across Nigeria