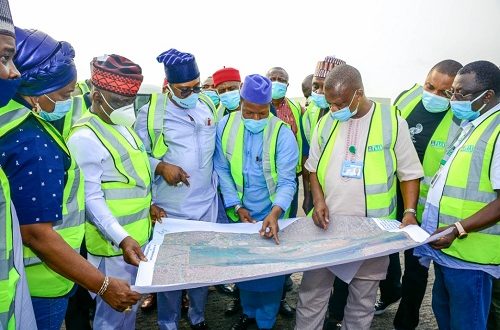 FEDERAL Airports Authority of Nigeria (FAAN) in a bid to close some of its infrastructural gap has asked to discontinue its 25% contributions to the federation account arguing that one way to ensure development is that revenue generated from the Sector be ploughed back.

Managing director of the agency Captain Rabiu Hamisu Yadudu who made the appeal yesterday when the Senate Committee on Aviation came for their oversight function argued that this is what entails everywhere and is International Standard and recommended Practice.

Yadudu also decried debt of airlines to aviation agencies particularly FAAN where he said a particular airline owes N13 billion for services rendered and unpaid for.

He said,” The industry is still having infrastructural gap to stabilize. Therefore government support in stabilizing the industry is needed. This can be achieved by suspending the contributions to the Federation Account in compliance with ICAO standards and recommended practices (SARPs) Doc 9562 on airport generation which provides that: Revenue generated by the airport should be transparently re-invested wholly in operating and developing airport facilities.”

He also highlighted on the global economic challenge both national and inbetrnational which has affected airline operators causing them to reduce fleet, frequencies or totally withdraw operations thus affecting the agency’s revenue generation.

Captain Yadudu further decried  the still rising operating and maintenance cost of the new terminals and existing ones due to inflation and the devaluation of the Naira but stressed that FAAN is tweaking its plans to make other airports that are not breaking even to perform.

He also said the airport managers have embarked on an aggressive debt recovery drive while it has introduced a pay as you Go system and has also commenced cashless policy among other loophole blockage areas.

Reacting to the FAAN boss’ call for exemption from contribution into the federation account, Chairman Senate Committee on Aviation, Senator Smart Adeyemi said the idea was commendable however the issue was constitutional and would need a review to achieve.

Adeyemi said,”The MD has been talking to us on aviation, especially FAAN, to be able to keep a good percentage of its resources generated internally. I have nothing against that for me; I feel it is good to keep so to be able to carry out the ever increasing need to maintain standards and to update the facilities of the industry but again these are issues that border on constitutional  provisions as money must be appropriated for.

He commended the managing director and the Minister for works done on runways like that of Enugu and Abuja but stressed that emphasis needs to be put on airports that have not had any form of rehabilitation since established especially those in need of refurbishing.

He said, “I was happy when we went to Enugu and saw the improvements and commissioned that runway and I want to commend the minister of Aviation and yourself for the commendable rehabilitation of Enugu runway but of course there are quite a lot of airports that we need to start looking at budget inclusion for next year not this years.

“We will not wait till there is a mishap before we start looking at fixing the runways which are in bad shape, a number of them since they were constructed, their runway has not been touched and at times when you land on some of these airports you don’t need to be a pilot to know that the plane will not maintain a balance.

He stressed that the Senate would be carrying out much more of its oversight this year,” We want you to know that in the course of this visit we may not be able to carry out holistic oversight but we came to interact with you and assure you that in this new year we thank god that COVID is now being checked globally and so we expect a more robust atmosphere for business and enterprise globally and more activities in the airports than what we had last year.

“What that will demand from us is that our oversight will be more regular this year. The next few weeks, we will knock at your door and would be able to properly articulate some issues bordering on money we want to see how they were spent; we want to see what has been achieved.”

Nigerianflightdeck is an online news and magazine platform reporting business stories with a bias for aviation and travel. It is borne out of the intention to inform, educate as well as alter perceptions with balanced reportage.
Previous FAAN says Kaduna Airport remains open; evolves improved strategies to contain security threats
Next ANAP says FG not FAAN should shoulder $500m Chinese loan debt