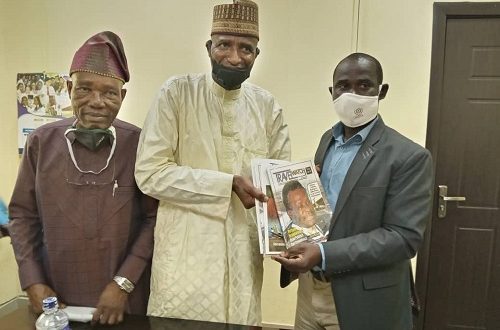 ASSOCIATION of Nigeria Aviation Professionals (ANAP) at the weekend said that the Federal Government should be responsible for the repayment of the $500 million Chinese loan obtained from the EXIM Bank of China for the construction of new terminals in some parts of the country.

The union also flayed what it described as humongous indebtedness to the Federal Airports Authority of Nigeria (FAAN) by its concessionaires saying the debts are preventing the agency from discharging its duties as entrenched in the Act setting it up.

In the document signed by Comrade Abdulrasaq Saidu, the Secretary General, ANAP, addressed to Sen. Hadi Sirika, the Minister of Aviation and copied Permanent Secretary, Minister of Aviation, CEOs of FAAN and other agencies in the sector and made available to aviation journalists over the weekend at the Murtala Muhammed Airport (MMA), Lagos ANAP said that since the $500 million Chinese loan was obtained by Princess Stella Oduah, the former minister in the sector on behalf of the Federal Government, the government should bear the financial burden and not FAAN.

Recall that the funds were taken from China in 2012 for the construction of five new terminals in the country by the government.

The union leader decried that many partnerships  FAAN has entered in terms of concessions have backfired and the beneficiaries refused to honour their agreements; land, shop rentages, concessions, Build Operate and Transfer (BOT) and billboard adverts with the agency.

The union also observed that there were untapped FAAN revenue points, which shouldn’t have persisted unabated and called for urgent action by the government to block these leakages in the system.

The union tasked Sirika to emulate President Muhammadu Buhari’s directive to the minister of Niger Delta Development Council (NDDC) to conduct a forensic audit, not only in FAAN, but in all the parastatals under his supervision.

The union insisted that until the minister carried out forensic audit, financial leakages, due to conspiracy to cut corners, which had deprived FAAN and government from the expected huge revenue loss from the Internal Generated Revenue (IGR) would continue to strive within the system unabated.

While condemning Bi-Courtney’s Murtala Muhammed Airport Two (MMA2) BOT agreements with the government, the union also frowned at the manner in which FAAN’s guesthouse located at Ikeja Government Reserved Area (GRA) in Lagos was sold.

On concession, the union concurred that it could be on leasing, BOT, or rent but most important, such deals must be favourable and transparent to all and sundry.

“We are aware of the following, being under concession or BOT: land, office, shop rents, but questions as to where their agreements are yet to be answered. For example, all lands occupied by the former Nigeria Airways nationwide since liquidation was occupied by property buyers, their land rent fees were not paid and have not been paying till this moment. It is security risk to allow anybody, persons or companies to out rightly own land at our airports”, the union warned.

Nigerianflightdeck is an online news and magazine platform reporting business stories with a bias for aviation and travel. It is borne out of the intention to inform, educate as well as alter perceptions with balanced reportage.
Previous FAAN canvasses suspension of Federation Account 25% contribution
Next COVID-19 Aviation palliatives: What will become of N22bn balance of N27bn?