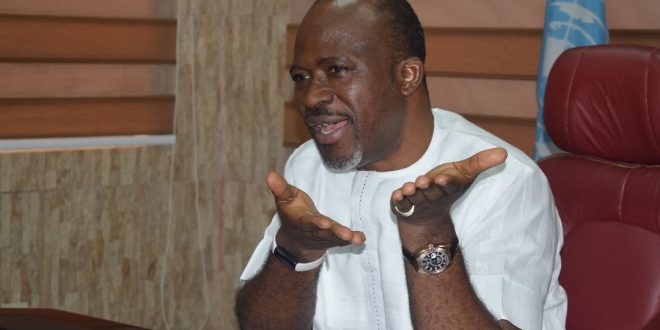 Retired Managing Director of the United States’ National Transportation Safety Bureau (NTSB), Mr. Dennis Jones, has lauded the achievements of the Accident Investigation Bureau – Nigeria (AIB-N) under the management of Engr. Akin Olateru took over in 2017.

Jones in a letter sent to Olateru said that he had been following activities in the bureau as far back as 2002 when the organsiation was a department in the Ministry of Aviation as Accident Investigation Prevention Bureau (AIPB), but the recent achievements under Olateru was extraordinary.

One of such achievements is the recent repeal of the AIB-N Act 2006 and it’s replacement with the Nigerian Safety Investigation Bureau (NSIB) Act 2022 which has further expanded the scope of work of the bureau.

Others according to him include expansion and modernisation of the AIB, building structures, launch of the training centre, modernisation, compilation of a competent and professional staff and connectivity to cyberspace through a prominent website combined with the admirable use of apps and social media.Jones added that the foreign assistance by AIB-N, also provided in the acceptance and successful completion of a delegated investigation, stressing that this marked a shining achievement of Olateru.

He said: “As such, I can confidently say that the gains and strides made by AIB-N under your leadership have been extraordinary, if not altogether unprecedented and consequently the organisation has become a world-class and premiere accident investigation organisation worthy of global recognition for its contribution to aviation safety and as an exemplary model of being an enterprising government agency.“

The growth, expansion and modernization of the AIB, including the building structures, launch of the training center, modernization, compilation of a competent and professional staff, connectivity to cyberspace through a prominent website combined with the admirable use of apps and social media along with interacting with the mainstream media have been fabulous.”

Jones further described Olateru as a visionary leader who had used his position to distinguish himself since his appointment as a Commissioner in AIB-N, stressing that he had placed himself in the upper echelon of luminaries in the aviation safety community and beyond.

“You undoubtedly have demonstrated the character, skill-sets, and acumen to achieve greatness, if such has not already occurred, in whatever future endeavours you choose. The Nigeria government and public have been well-served during your stellar tenure at the helm of AIB,” he added.

The AIB which since its Act was repealed changed nomenclature to the NSIB is now responsible for the investigation of air, marine, rail and other modes of transportation serious incidents and accidents in Nigeria and anywhere the country’s interest is affected.

AIB-N with its investigations and timely release of safety recommendations has in the last seven years enhanced safety within the sector and aims to replicate this in other modes of transportation in the country.Expanding the operations of AIB-N into a multimodal agency was one of the cardinal programmes of Olateru, the Commissioner of the bureau when he assumed office in 2017.

Nigerianflightdeck is an online news and magazine platform reporting business stories with a bias for aviation and travel. It is borne out of the intention to inform, educate as well as alter perceptions with balanced reportage.
Previous ‘No airline makes profit on wet-leased aircraft’, Sanusi makes case for formidable MRO
Next AIB-N begins transition to multi-modal transport investigation body, NSIB