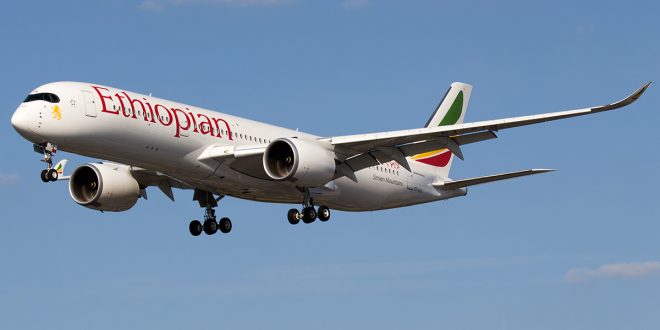 ETHIOPIAN Airlines has expressed its determination to ensure that the Single African Air Transport Market ( SAATM) works as the airline has mused that it is only through SAATM’s implementation that African airlines can take back it’s very low market share from non-African carriers.

Managing director Ethiopian International Services, Mr. Esayas Woldermariam Haliu made this known in his interview with journalists from Lagos where he decried the current traffic figure of passengers airlifted in the continent.

According to the International Air Transport Association ( IATA) African carriers presently contribute 3% of global air traffic, and are currently losing the balance of traffic by 80%to 20% to non-African carriers, which Woldermariam described as unacceptable.

He said, “when Single African Transport management which is advocated by African Union commission, when that one comes people think that only a few airlines will benefit from that, No! As we are speaking 80% of African traffic is taken by non Africans, so all of us put together we have only 20% so we need to attack that 80%.

“That is the reason why Ethiopian airlines is going to every African country and helping to establish regional national carriers.

He argued that if the SAATM is allowed the opportunity one of its benefits will be to redistribute wealth by reducing capital flight from Africa to non African countries.

“All this effort is for African airlines to grow, thrive and dominate the 80% of the market so that employment, taxes, revenue, opportunity the capital sinks in the African continent and does not fly away.

“Right now many of the African nation’s have been given traffic rights to non African nations more and when fellow Africans ask they deny them services. In some places people go from one part of Africa to another part of Africa via Dubai , Doha why? For what reason? Even some non African airlines are given fifth freedom to airlift and disembark passengers in the continent of Africa without having to go through the home base, but when such request incoming from a fellow African such nations hesitate or decide not to.

“So SAATM is a very good solution for Africa to put its hands together, organize itself together and to thrive, so SAATM is the best thing that can happen to Africa because air traffic connectivity is a tool for economy, cultural exchange, tourism, regional tourism as well as people and goods transaction. Africa has been transacting with overseas 90% and only 10%local economic transaction, why? Africa needs to buy and sell with each other, we need to do business with each other, so for that instead of building 30,000km rail and road, just 3km if runway can connect people and goods in the continent of Africa, as simple as that to start with.

Nigerianflightdeck is an online news and magazine platform reporting business stories with a bias for aviation and travel. It is borne out of the intention to inform, educate as well as alter perceptions with balanced reportage.
Previous ASKY commences Lagos to Johannesburg flights, via Douala and Libreville
Next Air Peace announces demise of Corporate Communications Manager, Christian Iwarah