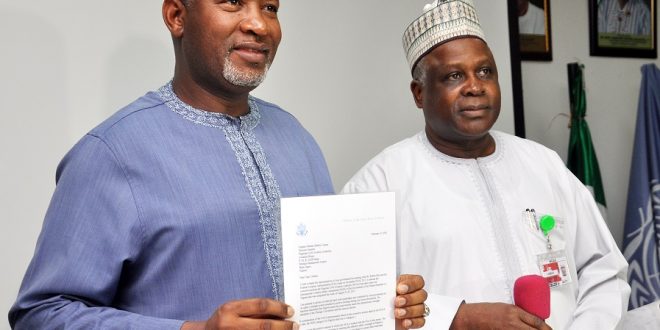 FOLLOWING Nigeria’s retention of the Federal Aviation Administration’s(FAA) Category one status, Minister of State for Aviation, Senator Hadi Sirika has said that the capacity of Nigeria Aviation has improved as the whole audit was done in-house by the Nigeria Civil Aviation Authority (NCAA).

Sirika made the observation yesterday during the presentation of the category one certification to him by the Director General of the Nigerian Civil Aviation Authority NCAA, Capt Usman Mukhar at the NCAA Annex in Murtala Muhammed Airport, Lagos.

Receiving the certificate, the minister thanked Capt Usman for making Nigeria proud, emphasizing that the Category one status is very significant to the industry.

Usman who presented the certification as a birthday gift to the minister said “in 2010, attained category one status, in 2014, we sustained it. In 2018, we have been able to retain it.

“I thank the DG and his team for doing us proud to retain the category one certification which has been presented to me. The travelling public might not be aware of what is being done at the NCAA but we in aviation are aware of the feat”.

“Before the audit, I was inundated with requests from various consultants that they wanted to help us in the audit for a fee, I listened to them and was told they were pivotal to our achieving Cat 1, in 2010, after hearing them out, called DG NCAA and asked if we needed them and he said we could do it by ourselves.”

” What is even great is that apart from the fact we did it on our own without external help, NCAA equally did not borrow funds from any sister agency, the entire expenditure for this was done in-house and that is good.”

Director General, Captain Mukhar Usman, who read from the official letter conveyed to him by the FAA Administrator, Mr. Dan Elwell, indicating that the country had scaled the audit exercise stated thus:

Nigeria has scaled through a recent re-certification audit conducted on its aviation facilities by the United States Federal Aviation Administration (FAA).

A team of auditors from the FAA had visited Nigeria for the audit of the safety status of the country’s civil aviation industry in November 2017.

The audit was for the Category One (Cat 1) certification that enables direct flight connections between the US and other countries.

It was gathered that the FAA Administrator, Mr. Dan Elwell, had conveyed the message of the country scaling the audit exercise to the Director General/CEO of the Nigerian Civil Aviation Authority (NCAA), Capt. Muhtar Usman.

It was also learnt that a fresh certification from the FAA on the new status would be issued the country before the end of March 2018.

The re-certification status will enable Nigerian registered carriers to continue to fly directly to the United States of America. There are eight critical elements required to be fulfilled before a country can scale the FAA audit.

The eight critical elements are: legislation, regulations, organisations, technical staff, technical guidance tools, licensing, continuous surveillance and resolution of safety concerns. While in Nigeria, the FAA had carried out intensive internal aviation safety assessment of the sector and there were fears that Nigeria may not retain the status it earned in September 2010.

Nigeria it was gathered retained the status after NCAA, and other major agencies in the sector closed all the identified “open items” when the FAA team visited Nigeria in August, 2017 to lodge complaints of some lapses in its regulatory oversight function

Nigerianflightdeck is an online news and magazine platform reporting business stories with a bias for aviation and travel. It is borne out of the intention to inform, educate as well as alter perceptions with balanced reportage.
Previous Union Bank fetes with, rewards customers at Data Enrichment Promo
Next Ease of doing Business: FAAN raising the bar on passenger facilitation, comfort and security