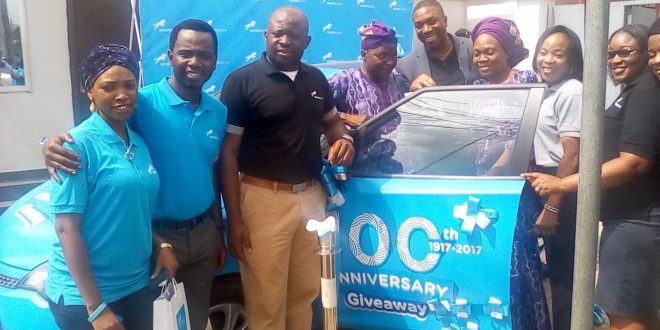 UNION BANK NIGERIA PLC in an effort to strengthen customer relationship on Friday rewarded some of its customers with the winner of a lotto going home with a brand new NG3 Union Bank branded car.

The event, UBN’s Data Enrichment Promo, which held at the Bank’s Dokpemu branch saw a Mr. Julius Ijibadejo all the way from Oshobo, Osun State win himself the brand new car.

The elated Mr. Ijibadejo who came for his gift in the company of his wife and children thanked the bank for its loyalty to its customers and for delivering on the car gift.

Eyewash Joseph, another customer of the branch won for himself a brand new 32inch LED Samsung Television. Both gifts were handed to the winners by the bank’s Head of Retail, Mr. Paul Aseme.

Head of Personal Banking, Tolulope Aderibigbe who spoke before the gifts were handed over said the bank was not just giving gifts but entrenching its relationship with its customers no matter how big or little.

Aderibigbe said the gesture was to support the banks customers in everything they did and stated that with Union Bank, anyone and everyone could be a winner.

Winner of the car gift in 2017, Mary Felix, a hair stylist who lives in Ajah, recounted her experience when she was called that she had won the vehicle.

“It was a surprise, in fact I don’t know what to say, but I can say that Union Bank is one of the best banks in Africa. I didn’t believe I would be a winner of a car but here I am, driving a car,” she stated.

A winner of N500,000 Mrs. Ojo Folashade who also spoke said,” I was to.d to go into saving by the branch at first I was reluctant but eventually succumbed. One day I received an alert and I was so surprised, I had to call my account officer who confirmed that it was true.”

Another winner of N500,000 Mrs. Blessed Odunugba from Fagba Branch was excited to tell her tale and according to her most of her colleagues would chide her for opening an account with a ‘ market women’s bank’

” I have been banking with them for a very long time and I’ve been doing so because of the way they trust their customers. In fact I have withdrawn my money from every other bank and I bank with Union Bank alone now. In fact when I got the alert, I thought it was a deduction but when I checked it, I was skeptical, I thought it was a fraud but I eventually called and was told it is as real as it can get. I got N500,000 form that, so that is why I like Union, it is dependable.”

Nigerianflightdeck is an online news and magazine platform reporting business stories with a bias for aviation and travel. It is borne out of the intention to inform, educate as well as alter perceptions with balanced reportage.
Previous CSR: Dana Air to fly US-based doctors on free medical mission to Uyo
Next Category One: Sirika emphasizes Nigeria’s in-house capacity to undertake audit