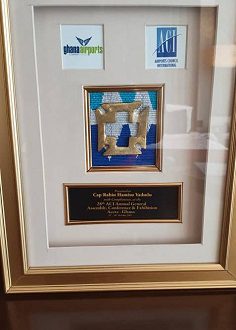 Capt Yadudu appointed as ACI-Africa Rep into World Governing Board, gets award

NigerianFlightDeck 16th October 2019 Appointments and Labour Comments Off on Capt Yadudu appointed as ACI-Africa Rep into World Governing Board, gets award 110 Views

This is just as former ACI-Africa President, and Former FAAN Managing Director, Engineer Saleh Dunoma on Sunday at the 62nd meeting of the ACI Africa Board, handed over to his successor, Mr Mohammed Zouhair El Aoufir of Morocco.

Captain Yadudu’s appointment into the board was announced on Wednesday by Secretary General of ACI-Africa, Ali Tounsi at the ACI Africa Annual General Assembly.

The FAAN managing director was one of the three representatives of the ACI-Africa to be part of the world governing board, others are Mr. Mohammed Zouhair El Aoufir of Morocco and Mr. Emmanuel Chavez of Mozambique.

Yadudu had on Tuesday evening been presented with a Plaque by the ACI received in his stead by General Manager Corporate Communications, FAAN, Mrs. Henrietta Yakubu.

Meanwhile, Former President of ACI, Engineer Dunoma had handed over reins of office to the new president giving him his best wishes in office.

Engr Dunoma also made history as the first Nigerian to preside over the body made up of 62 members, operating 250 airports in 47 countries throughout the African continent.

Nigerianflightdeck is an online news and magazine platform reporting business stories with a bias for aviation and travel. It is borne out of the intention to inform, educate as well as alter perceptions with balanced reportage.
Previous Sirika hands ICAO safety plaque to President Buhari as aviation sector is rated 96% Safe
Next President Buhari assents to N10bn request for Akanu Ibiam international Airport upgrade