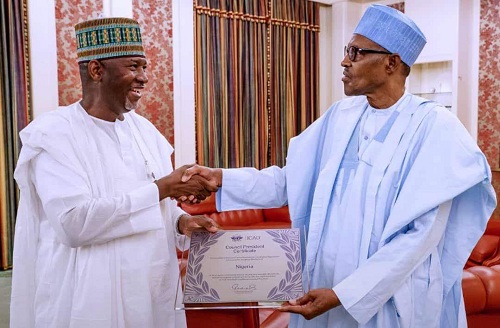 Minister of Aviation, Hadi Sirika who made this known on Tuesday, said Nigeria’s rating improved when the federal government adopted policies to improve security measures at the airport stating that of the 193 countries audited, 16 of which Nigeria was part, were found to have improved considerably.

According to the Minister, who was at the Presidential Villa to present the plaque to President Muhammadu Buhari, one of the measures the industry adopted was to develop a new template for security, including hiring security experts to re-organise the entire system.

He said: “Today Nigeria has shifted from where it was in aviation security because we have scored 96.4 percent. I have just seen the President and delivered to him something that we are very proud of as Nigerians; a certificate for improved security in civil aviation.

“Civil aviation is about safety and security, how very safe and secure you depart a point and land at the other point. At the time the current President took over we were very marginally scored in terms of security and safety.”

The Minister, who recalled how some passengers of Turkish Airline threatened airport officials in 2015, said the incident served as a wake-up call to aviation officials in the country and they kept improving the security architecture across the country’s airports, leading to the attainment of a near perfect situation.

“We developed a template for security, engaged experts, came for approval from the President and he graciously approved that we reorganise the system to make it better. We included the appointment of key individuals including the Head of Aviation Security in the Federal Airports Authority of Nigeria FAAN where we found a seasoned Group Captain who was a security expert himself and got him trained on aviation security and deployed him as Head of security.

“Among other measures we put in place to deal specially with insider security and that got us somewhere on the world map of aviation security.

“Nigeria was certified alongside 15 other countries, after a worldwide survey on security by the International Civil Aviation Organisation ICAO.

“ICAO which is the having the statutory responsibility of monitoring, policing or regulating the world of aviation and setting standards, took a survey of 193 member countries of ICAO form among which 16 were found to have improved security in their aviation system tremendously and gladly, Nigeria was one of those 16 countries.

“Our score from the audit of ICAO was 96.4 percent, a remarkable improvement from a country that was scoring less than 50 percent in the past. Today, form the approvals we got from our President, his guidance and counselling, we have been able to raise that to 96 percent, which is near perfect and in recognition of that, the country Nigeria received a certificate in Montreal Canada during the General Assembly of ICAO and we are proud to announce that.” he said.

Nigerianflightdeck is an online news and magazine platform reporting business stories with a bias for aviation and travel. It is borne out of the intention to inform, educate as well as alter perceptions with balanced reportage.
Previous ACI advises African airports on innovation, inks agreement to review 17 airports
Next Capt Yadudu appointed as ACI-Africa Rep into World Governing Board, gets award