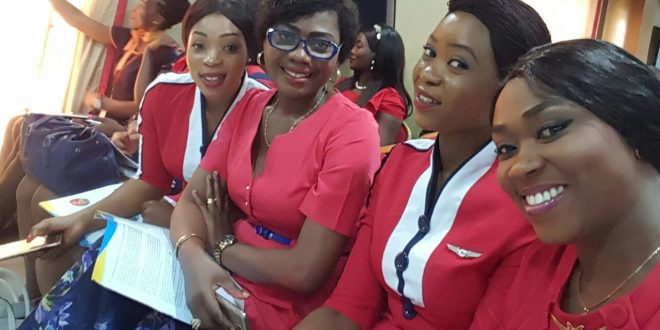 VETERAN  Cabin Crew practitioners  have agreed that the job description of a cabin crew goes beyond the glamour and most times the misconception associated with it as they highlighted the complexity of the profession stressing that the major role of the profession beyond all is safety.

Cabin crew professionals  made this known at the Cabin Crew fair  organized by veteran cabin crew and aviation blogger, Joy Ogbebo at the  Royal event Centre.

Hundreds of  cabin crew and aspiring cabin crew gathered  and rubbed minds on how to share information, knowledge about the profession as well as recognize veterans who have contributed immensely to the growth of the profession.

Delivering her welcome address, the organizer of the fair, Joy Ogbebo  while introducing aspiring Cabin Crew to their career choice and helping them identify the key skills required to be part of the industry said Cabin Crew members are highly trained professionals whose primary duty is to ensure the safety of passengers during flight.

She stated,”Their job is unique. They put the comfort and safety of passengers first and evacuate the passengers within 90 seconds in an event of an emergency. They are the last to leave the aircraft. The level of training they receive makes them well-rounded and grounded. They are the sky heroes.”

Ogbebo also pointed out the adventurous and glamorous nature of the job stating,” Imagine having breakfast in Lagos and dinner in London. They Meet world-class leaders, superstars and very important personalities. The work schedule is quite flexible compared to the 9-5 jobs. Awesome isn’t it? But it isn’t fun all the way. Its hard work! It can be quite challenging. Juggling roles most of the time and trying to strike a balance. It could be mentally tasking and sometimes draining. We are constantly working in very sensitive and highly regulated environment. Any slip would result to not only great loss to the company but also bodily harm.”

She also talked about the downside to the job stressing: “Imagine doing a job that requires you to prepare for an emergency situation round the clock. Eating late at night, which could be unhealthy, digestive problems, constant exposure to pressurized Cabins, likely physical assault by passengers, jet lag, hijack threat, which has become heightened due to the level of global insecurity? Talk about late payment of salaries/flight allowances or no payment at all, Job insecurity, aggressive and unruly passengers. The list is endless”.

Also speaking Veteran Cabin Crew trainer, Chief Mrs Tolulope Daudu stressed the safety component of the cabin crew job  stating that it wasn’t the glamour that was important but the fact that cabin crew are safety practitioners.

“The job of the Cabin Crew  is to make passengers comfortable, calm them down during a flight ads most times people are nervous. Our major roles as cabin crew is safety for those you are serving, it’s a major parts of the business. Secondly, you come across  different sorts of people but know that you are the ambassadors of your organization and people will talk about you so if you are rude, they generalized  and that affects the company.”

Speaking earlier,  former Managing Director of IRS Airlines, Mr Yemi Dada, who was chairman of the event stated that  Cabin Crew occupies special place in the aviation industries, which should not be ignored.

Dada told participants that the profession though very attractive, requires a lot of hard work, dedication and passion, adding that a Cabin Crew does other duties apart from the primary one assigned to him or her.

According to him, “Being a Cabin Crew turns you into a nurse, Commercial Officer and gives you other duties such as managing all kinds of people on board the aircraft.”

He commended the organizer of the programme for a job well done, adding the forum would not have come at a better time than now, urging potential Cabin Crew to be focus if they really want to be one.

Nigerianflightdeck is an online news and magazine platform reporting business stories with a bias for aviation and travel. It is borne out of the intention to inform, educate as well as alter perceptions with balanced reportage.
Previous House Co’ttee visit Kaduna Airport, expresses satisfaction with operations
Next Rwand Air adds Lagos – Accra to route network, to begin London flights May 26