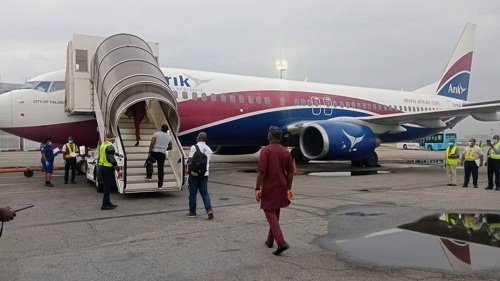 Passengers boarding the first commercial flight out of Lagos POST-COVID-19 lockdown on Wednesday at Domestic wing of the Murtala Muhammed Airport, Ikeja, Lagos

OF the five airlines granted approval to start operations from today, Arik Air; Air Peace and Ibom Air will commence operations  today with Arik starting the first commercial flight out of Lagos.

Arik Air took off to Abuja at7:20am  just as Air Peace and Ibom Air are gearing for flights today at various intervals.

For unscheduled aircraft operators, the committee said that Allied Air Limited, ANAP Business Jets and Bristow Helicopters had so far complied with the NCAA regulations.

Currently, Nigerianflight has it on good authority that Arik Air has commenced flight to Abuja while Air Peace will be airborne by 10:30 today for their first flight. At 11 am, Ibom Air will take to the skies.

Chief Operating Officer Ibom Air, George Ureisi who responded a message sent, affirmed the airline would commence operations today stating that,” We’re flying to Abuja at 11am, From tomorrow we will move to two flights- 7am and 11 am.”

Also  Overland Airways which does not fly Lagos to Abuja will start would resume flight services, according to its Chief Operating Officer, Mrs. Aanu Benson on July 15, 2020.

Nigerianflightdeck is an online news and magazine platform reporting business stories with a bias for aviation and travel. It is borne out of the intention to inform, educate as well as alter perceptions with balanced reportage.
Previous Re-echoing the call for a national carrier; a bird’s eye perspective
Next Dana Air announces July 9 resumption with three daily Los/Abj flights