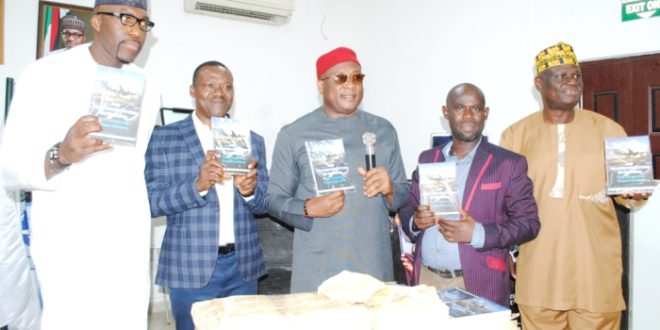 The book: ‘Air Transportation In Nigeria: The Lingering Expectations,’ got an industry wide thumbs up at its launch at the Nigerian Civil Aviation Authority ( NCAA) Annex yesterday with various stakeholders expressing how much it has chronicled several burning issues in the sector and what to do.

Aviation journalists Olusegun Koiki and Chinedu Eze embarked on writing about the challenges in the air transport industry in Nigeria looking at key topics like policy and policy somersaults in the industry, corporate governance in the sector, owner manager syndrome and other key topics that have bedevilled the industry for over three decades.

Chief launcher of the book, Barrister Allen Onyema who talked about the book before pledging his launch commended both Eze and Koiki for coming up with the fantastic document, a book which will serve as reference for generations to come.

According to him, he may differ a bit or have a variant idea about certain things but said that on policy somersaults, he agreed 110% with the book stating that he would recommend it for everyone in the aviation industry as reference.On owner/ manager syndrome he acceded that some owners have handled the aviation business shoddily and didn’t know how to run the affairs of the airlines separate from their private enterprise but disagreed that all owners are so.

“Some owners have done well, ” he said,” some of them came in from other spheres of businesses where they were successful and aviation is a business and some have and are still running it successfully.

“You see money and you think it’s your money and you go ahead to throw parties with it, put it in other business or carry out other trivialities but only one bird strike and all the money is finished.”

He said.”However, some of us believe in corporate governance and we have boards that guide our decisions and so that makes a lot of difference.”

“It is not an easy business and airline owners are about the most patriotic people because there is not a lot of profit and still go at it with all the other extraneous challenges which affect the business.

In a short remark earlier, the Director General of the Nigeria Civil Aviation Authority (NCAA), Captain Musa Nuhu represented by Director of Aerodrome Airspace Standard, Engr. Tayib Odunowo said while going through the book, the title struck him,’ the lingering expectations’

He admitted that some challenges were beyond the industry as the sector has no control over them stressing that things like Forex and Jet fuel were lingering challenges that affected the sector.

He said the title equally struck him because as regulator they had to ensure the compliance of the three ‘A’s: the airline, the airports and the airspace and he further mused at the lingering expectations in those regards.

Former Arik Air Managing Director, Chris Ndulue who was also present attested to the fact that some of the challenges highlighted in the book are same over three decades old challenges meaning that solutions for issues like Forex, fuel, infrastructure were still major challenges.

The crème dela crème of the aviation industry were present to grace the book launch including the Chairman of Arik Air, Sir Arumemi Ikhide; Dr. Alex Nwuba, Mr..Richard Aisubeogun and a host of others.

Nigerianflightdeck is an online news and magazine platform reporting business stories with a bias for aviation and travel. It is borne out of the intention to inform, educate as well as alter perceptions with balanced reportage.
Previous NIS MMIA sensitizes school kids, market women on dangers of irregular migration
Next Arik Air restarts Ilorin, Asaba flights December 20