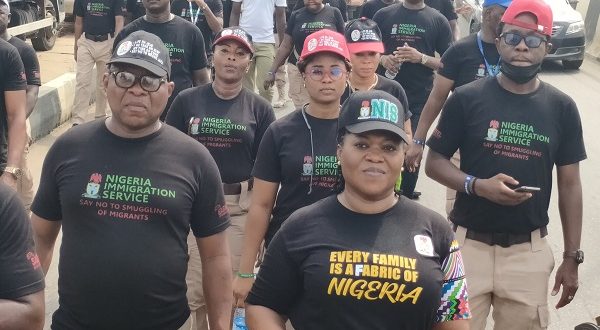 Comptroller A. A. Adesokan leading officers of the Murtala Muhammed Intentional Airport Command of the Nigerian Immigration Service on a sensitization walk to schools, markets to create awareness on the dangers of irregular migration.

This is just as she said that in 2022 alone at the MMIA there has been deportation of two thousand and fifty – seven Nigerians (2,057) due to Immigration related offences with three hundred and eighty-seven (387) deportees handed over to International Organisation of Migration (IOM) while forty (40) deportees were handed over to National Agency for the Prohibition of Trafficking in Persons (NAPTIP).

She made these known during a two-day public sensitization programme themed around “The Dangers Of Smuggling Of Migrants And Other Irregular Migration Activities” was organized by the MMIA Command of the NIS, a campaign taken to secondary schools, markets and motor parks to raise awareness on the dangers of this trend.

Adesokan during her welcome address expressed deep displeasure and indeed, a great sadness, for the subject that has become a trend as people were hell-bent on leaving the country at whatever cost, including their lives.

“Within the same period under review, a total of 0ne hundred and eighty-one (181); One hundred and forty-three (143) females and thirty-eight (38) males, were refused departure due to non-compliance with standard travelling procedures. You may wish to agree with me that Smuggling of Migrants is one of the major vices denting the image of our great country, Nigeria.” She said.

According to the CIS, the stories that emanate from survivors of these ordeals are heart wrenching,”As a woman, wife, mother, aunt, sister, daughter and a human being, my heart bleeds each time I encounter the horrific tales of smuggling of migrants and their attendant consequences, especially as narrated by victims-turned-survivors.

These terrible narratives should never be part of the story of the human race. Certainly not in the twenty-first century!”

“Where does one start from? Is it from the horrific personal accounts of beautiful young women who were exposed to unimaginable horrors of modern-day sexual slavery and exploitation, hard and abusive labour? Is it the near-death experience of rescued stowaways on the high seas?

“Is the frustration of watching young, energetic youths desperate for greener pasture but poorly informed ill-prepared, haven sold almost everything of value to them and their parents to be able to travel? Or parents/guardians who ignorantly sent their children/wards in the way of risks and death all in the name “making it”?

She decried that Nigeria is losing a lot of her youths, especially females, in their primes, to the twin evils of smuggling of migrants and trafficking in persons and other criminalities and vulnerabilities associated with irregular migration.

She continued,”Deceived, manipulated, or inadequately informed, these vulnerable Nigerians are repeatedly lured into a maze of avoidable hardships and risks. A most worrisome aspect of this agonizing reality is that this ugly trend seems to show no signs of slowing down. As sets of youths are returning to the Country either voluntarily or involuntarily; new sets are desperately embarking on journeys into the unknown in search for greener pasture.

The aim of the two day event which consisted of a symposium for Day 1, and a Road Walk for Day 2 aims to provide information and education to young Nigerians from schools and the Youth Corps, official partners, sister agencies, members of the diplomatic corps, service providers, and more importantly, rehabilitated victims of Migrant Smuggling.

Comptroller AA Adesokan, led officers of the Command for a walk around Lagos suburbs to raise awareness on Migrant Smuggling.

Nigerianflightdeck is an online news and magazine platform reporting business stories with a bias for aviation and travel. It is borne out of the intention to inform, educate as well as alter perceptions with balanced reportage.
Previous Operators envisage flight delays, want FAAN to increase airline counters in Abuja
Next Aviation community lauds authors of ‘Air Transportation In Nigeria: The Lingering Expectations’