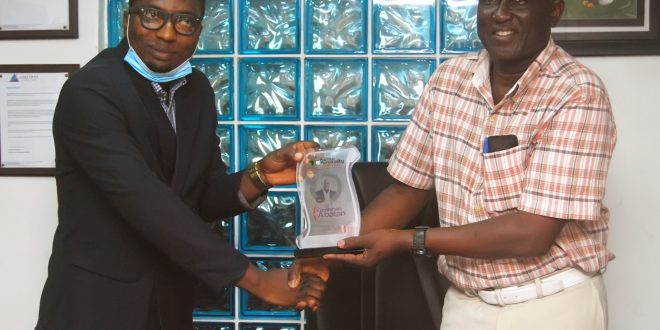 PRESIDENT/CEO, Airfirst Nigeria Limited (AFNL) Group of Companies, Engineer Gbolahan Abatan has been awarded Leads Africa’s Patriotic Personality Awards by the League of African Development Students (LEADS) using the award as a medium to develop the continent by engineering change in the youth.

Airfirst, an Maintenance Repair Overhaul (MRO) organization which carries out aircraft maintenance from Dominion Hangar facility at the Murtala Muhammed Airport, Lagos has been operations since 2013, also carrying aviation consultancy as well as aircraft management.

Engineer Gbolahan, an Aircraft Maintenance Engineer, who received the LEADS award in his office, also said that he will continue in his way to promote the image of Africa anywhere he goes but expressed his surprise at the award stating that it was the much needed reminder to spur his dream to invest in the youth.

According to him, the company is broadening its horizon and is set to commence operations in another West African country as his drive is to touch Africa generally as a business and an outreach to drive development through imbibing values in the younger generation.

Receiving the award he said,” I was surprised.  Reading through all these today,  I am marveled and grateful because I thought I was just an ordinary person doing my thing I didn’t know my works will speak for me.”

On how to spread development, he said, “…Until Africa stands to be the real giant of the universe, I am not going home yet. I want to play a very big role in developing Africa and what I have discovered is that development of any nation starts from the youth. I look at it, I can’t stand and start preaching to people do this and that, the only way is take the youth bring them closer and imbibe that culture in them and by the time the grow they will imbibe it.

“And by the time I am gone and done those people hundreds of them will spread out and they will do the same thing. And those were the last words of Dr. Tai Solarin to me, he said,”I have given you one thing that no man can take from you’ and that is; education and self discipline, go out there and multiply yourself.’ I still have that in my heart to see many of the youth, not only of this country but continent and you have come here to rekindle that message. I want to assure everyone here, I want to leave the rest of my life that way,” he said.

On promoting the continent, Engineer Gbolahan said, “I do anything to promote the image of Africa and I do that anytime I go out and when people ask me where I am from, I proudly tell them I am from Nigeria, in Africa because the orientation is totally different from what you see here and I tell them This is Africa. I strongly believe I am made for Africa, my friends jokingly call me King of Africa.

LEADS is the umbrella body for all Democratic Students Unions in Africa which started in 1985 at the Bayero University, Kano with the objective of sensitizing its members on Development of Best Practices and now represents 25 countries in Africa.

Nigerianflightdeck is an online news and magazine platform reporting business stories with a bias for aviation and travel. It is borne out of the intention to inform, educate as well as alter perceptions with balanced reportage.
Previous ICPC inaugurates FAAN anti-corruption, transparency unit
Next Ibom Air to start Enugu flights from Lagos, Abuja September 14