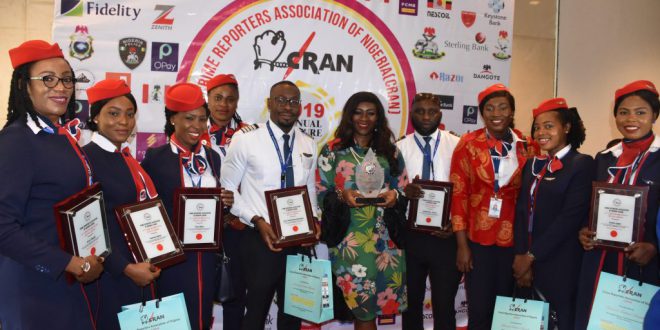 AIR PEACE has been commended for putting security as the forefront of their operations with cabin crew’s thwarting efforts by two women to0 traffic a three-month old boy from Lagos to Banjul.

Crime Reporters Association of Nigeria (CRAN) gave the award to the airline at the 27th edition of the annual lecture and awards of CRAN in Lagos.

President, Crime Reporters Association of Nigeria, Sunday Odita, said at the presentation that: “We are elated as reporters to observe in the course of our duties that some people are doing things worthy of writing home about. When we noted that an Air Peace Crew demonstrated commendable professionalism and humanness by frustrating the attempt of two women to traffic a three-month baby-boy on a Lagos-Banjul flight on June 4, 2018, we penned it down as something worthy of reward. Hence, today, I am privileged to fulfil what our members patriotically resolved over a year ago.”

The CRAN President commended his members “for voting nem-con to bestow the Most Security Conscious Crew Award on Air Peace Crew, even when it was tabled before the house for voting repeatedly.”

This he added, shows that the honour is well deserved and well thought out.

While calling on people in all walks of life to emulate the uprightness demonstrated by the Air Peace Crew, he encouraged the winners to “be proud of the award because it is coming unsolicited from the conscience of the society.”

“It has proved worthwhile as the airline had in recent times prevented three acts of child trafficking. Our flight attendants are always security aware and we will continue to partner with the National Agency for the Prohibition of Trafficking in Persons, NAPTIP, to report any suspected act of child trafficking”.

Recounting how the incident happened, he said, “One of the flight attendants noticed that a baby was crying endlessly on board and approached the supposed mother who refused to breastfeed the child. The whole thing became suspicious and on arriving Banjul, the crew alerted the authorities who questioned the two women. It was subsequently discovered that the child was not theirs and it was obviously a case of child trafficking”.

The CRAN Awards reflect a determination to reward individuals and organisations that have executed key humanitarian initiatives, especially efforts aimed at preventing crime.

Nigerianflightdeck is an online news and magazine platform reporting business stories with a bias for aviation and travel. It is borne out of the intention to inform, educate as well as alter perceptions with balanced reportage.
Previous Flight delays, cancellations: Airlines need to plan for the unexpected
Next House Co’ttee on Aviation to support NAMA on facility upgrades, funding